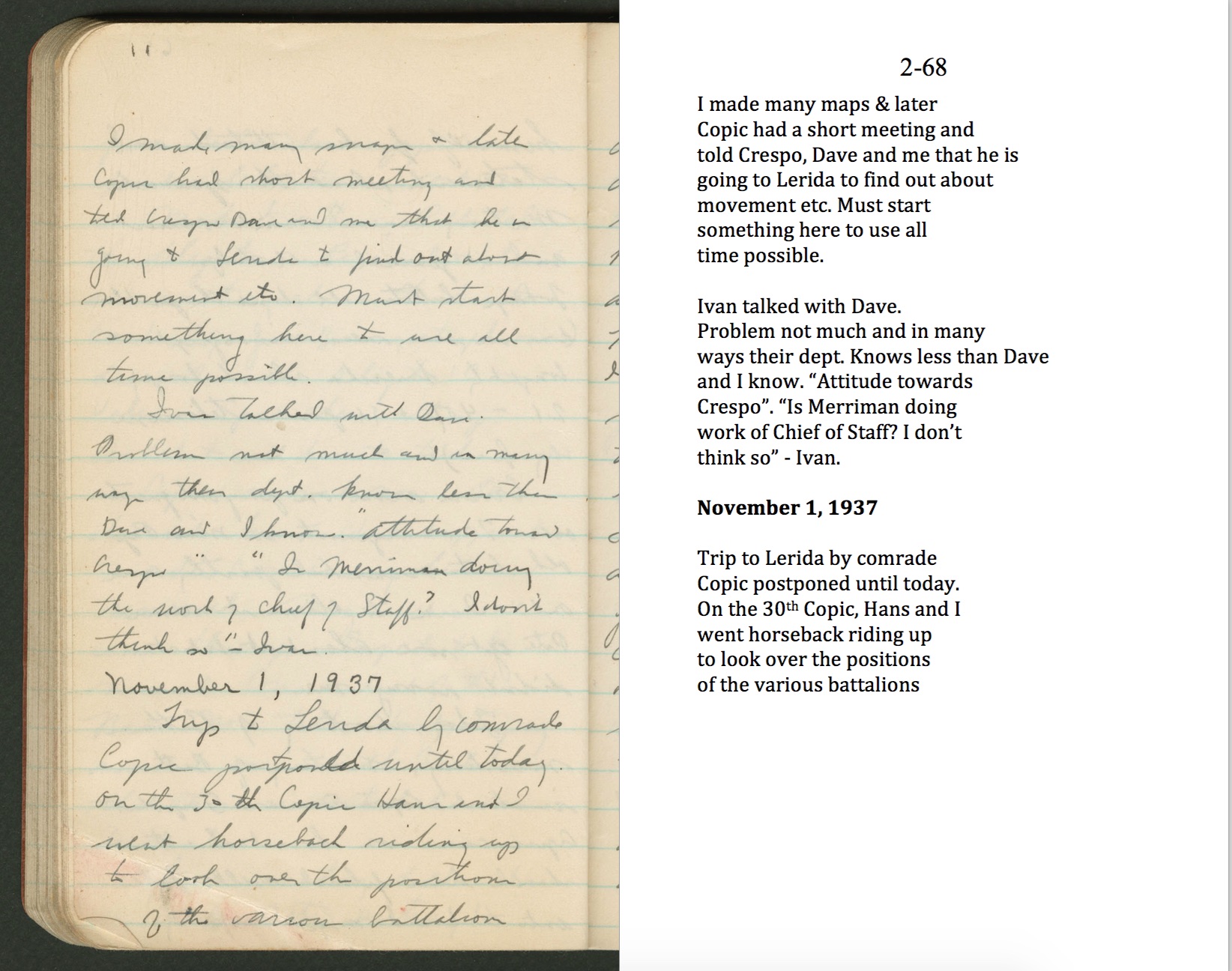 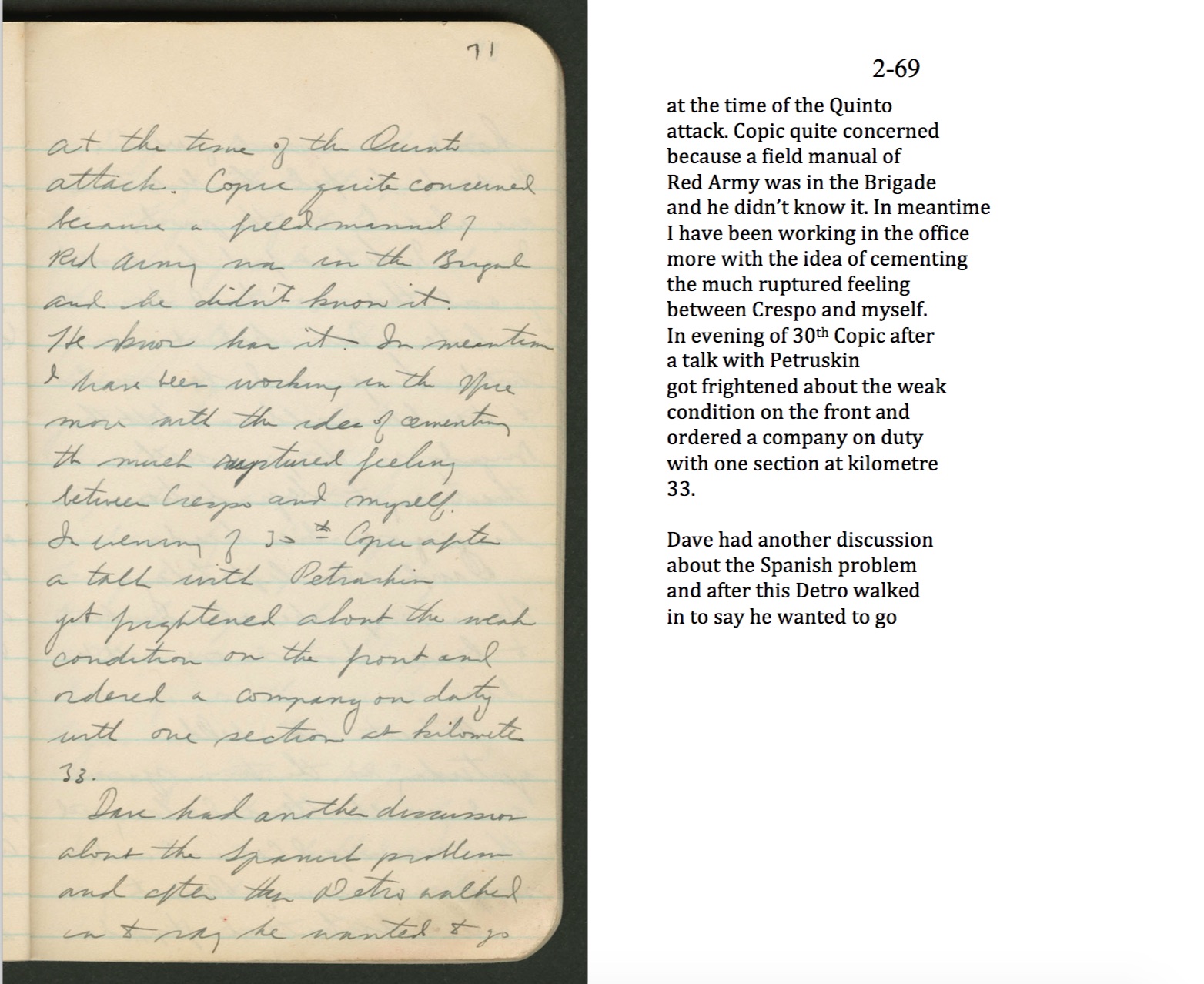 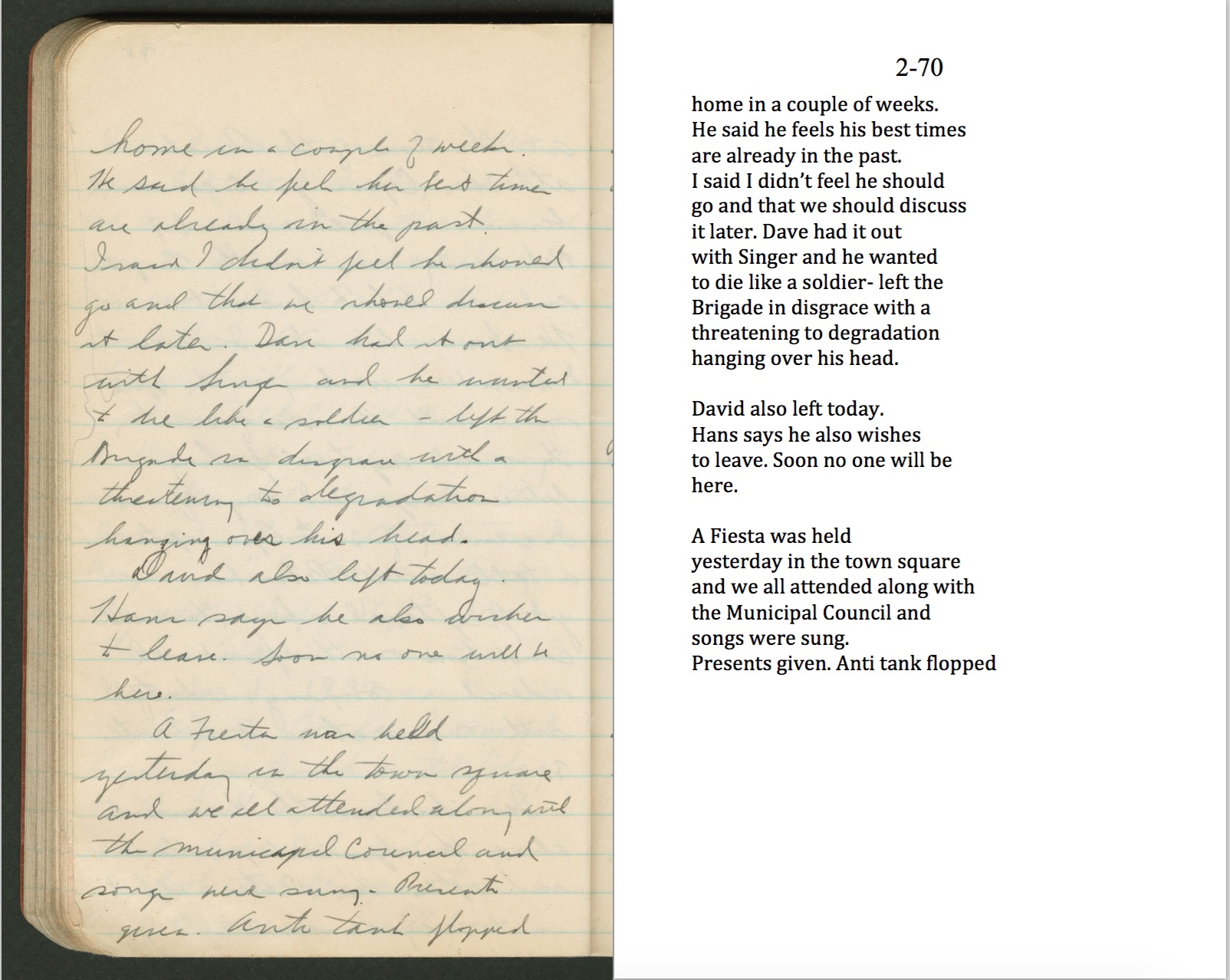 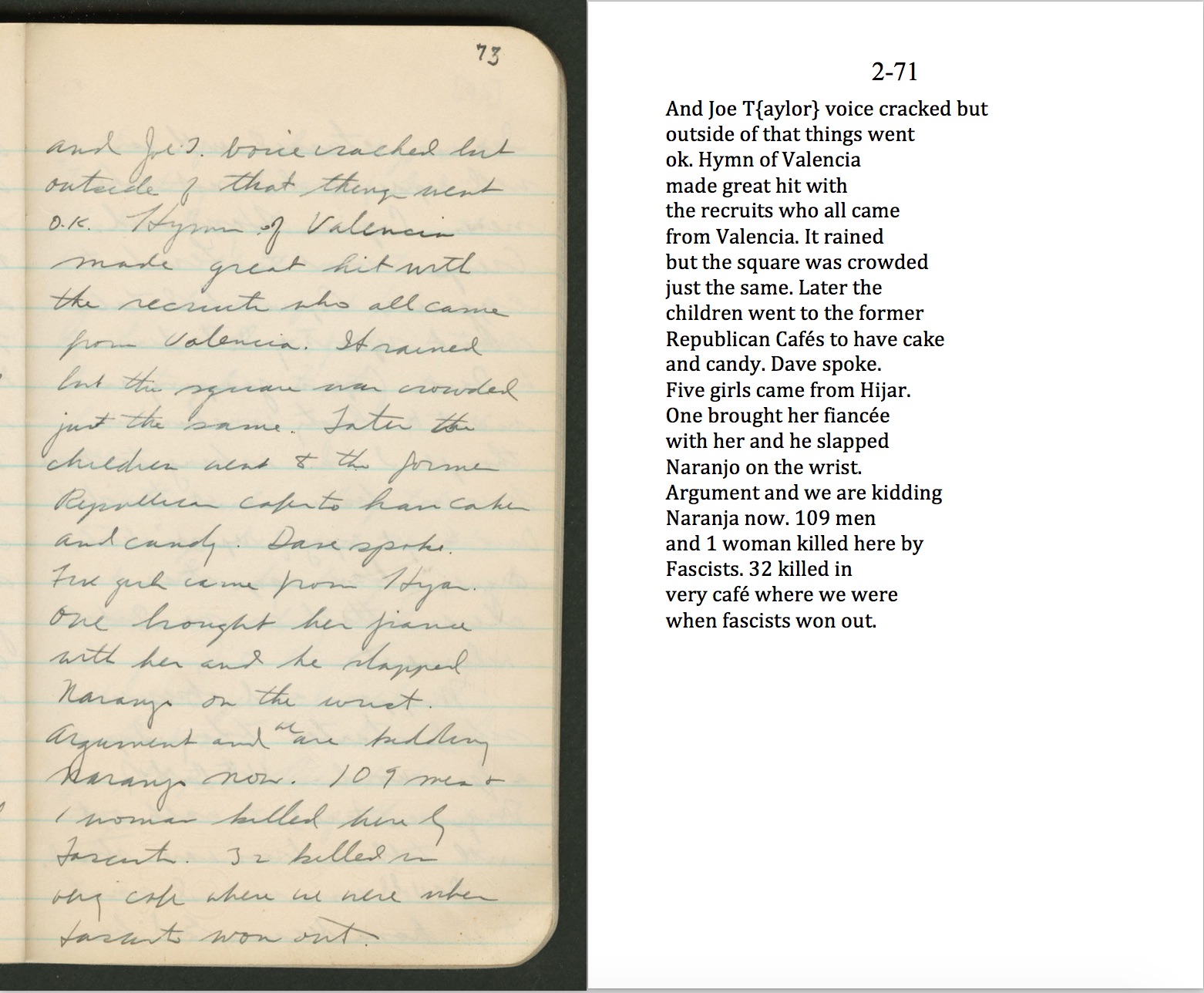 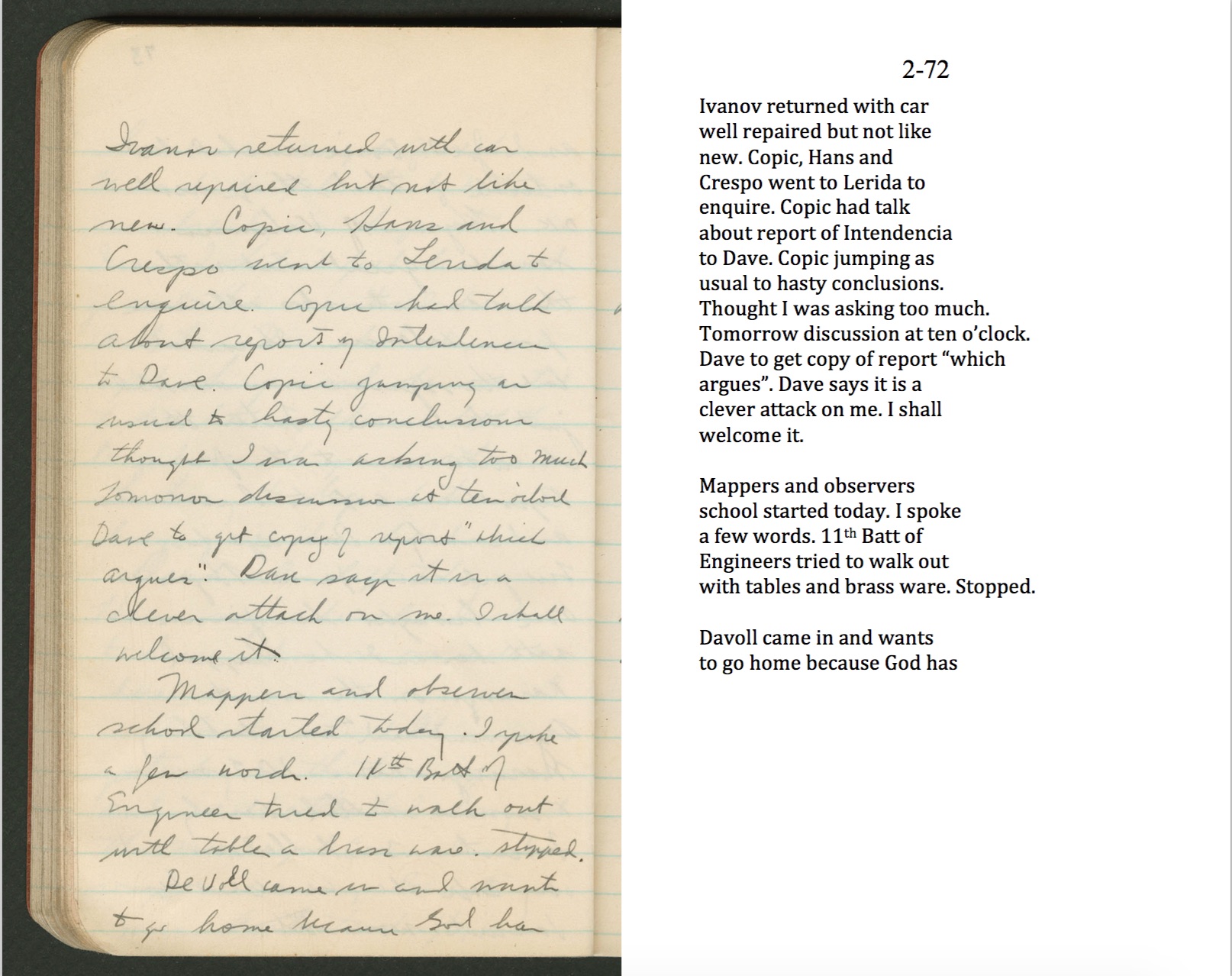 As all good things must end, Merriman is running out of pages in his second diary and is wrapping it up.  On November 1, he starts his last entry.   He says that Copic left on November 1 to Lerida, but before he left Merriman, Hans and Copic went for a horseback ride.  A photo of Hans Klaus and Copic exists in the ALBA PHOTO 177 collection.  It is quite likely that this photo was taken by Merriman himself with the camera given him in September.  We would like to thank the Tamiment Library for their permission to include photos here (with attribution) and remind readers that there is a donation page to the Library which continues support their work.

While the front appears to be stabilizing, Copic is still worried about the weak state of the Brigade.  He orders a company to be put back on active duty and one company should be placed at Kilometer 33 on the Quinto-Fuentes de Ebro highway.   It would have been a scary place to be placed as it is just a flat crossroads, guarding the road and bridge to Pina and not even a rock to hide behind.

Dave Doran is meting out discipline.  Doran would get a reputation as a no nonsense Commissar and in this section, he is discussing “the Spanish Problem” with Merriman when he hears from Phil Detro that he wishes to go home.   On the same night, he effectively cashiers Bernard Singer and Singer has to leave the Brigade.  He doesn’t know when he leaves if he will be demoted.   Singer is willing to go to the front line to die and get it over with.   Singer would be killed in action near Gandesa in August 1938.

Then Doran leaves as does Hans Klaus.   Many of the Brigade took leave in Madrid during this quiet period and it is possible that was their destination.  Milt Wolff is quoted in Eby as saying that during this time, Detro and Fred Keller practically set up a second residence in Hemingway’s apartment in Madrid.¹

Merriman talks of a fiesta held in Quinto on October 31 and speaks of Joe Taylor singing.  Marion Merriman Wachtel places the fiesta at somewhat later in November² and it is possible that there were actually two events.   The photograph on the left shows the fiesta with the staff on the balcony on the right.    The photo on the right is a blowup of this Randall photograph.

In the second pair of photographs, Joe Taylor is singing under the portico on the left on the other side of the square.

Merriman is in trouble with Copic again because he wrote a report on the Intendencia which was critical.  Copic is using the report to get at Merriman.  This coincides with a quote from Marion Merriman that Copic did not want people to argue with him.  Merriman has asked for a copy of the report to see what is “argumentative”.

They are holding schools in Quinto and Merriman says that he has to stop the 11th Engineering Regiment from looting.

Merriman says that he spoke with Davoll who has gotten religion and feels that he needs to go back to the US and preach.  This is Theodore Davoll (thanks to Chris Brooks for being our “biographical dictionary” for this site) who attended Eastern Navarene College and was a part time preacher.   Davoll says Merriman is standing in the way of “God’s Will”.   Merriman probably hopes he is standing in the way of Fascists getting to Madrid.   Merriman tells him he will stay but that he should come back to talk to him.   Davoll would be killed in the upcoming battle of Teruel in January 1938.

Detro got sick and is now in hospital as is Lou Secundy. In October and November, grippe and typhoid were rampant.  The situation was so bad that on November 3,  General Walter gave ranking command to Dr. Len Crome.  Over Juan Bravo’s signature for Walter, he says that the primary order of the day is for the medical staff to hold meetings with the battalions to explain to them the causes of grippe and typhoid and to warn them that sickness and death is likely if they don’t remediate the sanitary conditions.    Dr. Soto was responsible of sending a number of men to hospital.  Saul Wellman is also in Benecassim on rest and relaxation.  Others (old men) are going off to hospital as well.  On November 9, the writer’s father, Harold Hoff, would go off to Castellejo for the first of his many hospital trips with grippe.

These are the last known words written by Robert Merriman in his diaries.   On November 5, Bob Merriman would arrive for a visit in Albacete with Marion and Bob Merriman would inform her that she was going to have to go home to the US.²  He told her she was needed to campaign for funds for the Brigades.  Marion believed that Robert had come to believe that the war was unwinnable and he wanted her out of Spain.  Whatever the reason for Marion’s departure, she was handed the two diaries to take back with her to the US.  Their survival is truly remarkable given the frank talk in them and the likelihood that the censors would not have approved of all this information being released.   Marion would meet again with Robert in Ambite on November 17 for one final goodbye and then return to the US on December 22, 1937, on the Manhattan.  28 year old Frances M. (Stone) Merriman was listed as heading for 541 Delores Street in San Francisco.³   She would tour the US for the next year making calls for donations to the Brigades.

The International Brigades would remain in the lines for nearly eleven more months.  They would fight:

The Brigades would be near the French border by the end of October 1938 in a town called Ripoll and the majority would be pulled out of Spain by the end of December 1938.   Some, however, would not leave until February 1939, especially if they had been based near Valencia, and some later still if they were captured in the Retreats.   Some, like Robert Merriman, would never leave.  He was captured and killed on or about April 1, 1938, in the area between Corbera and Gandesa as they were trying to break out to the Ebro River.  His body was never found but the search goes on.