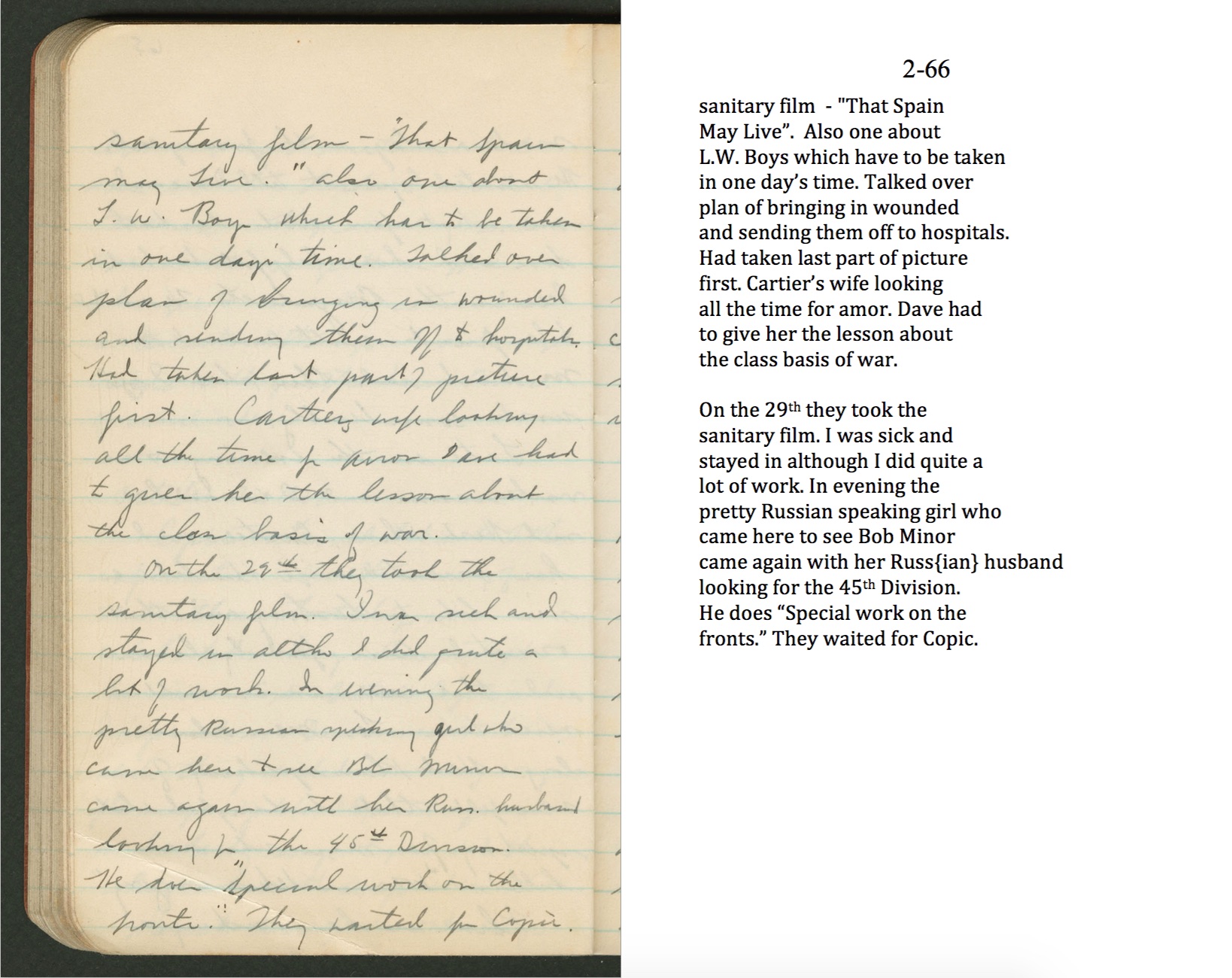 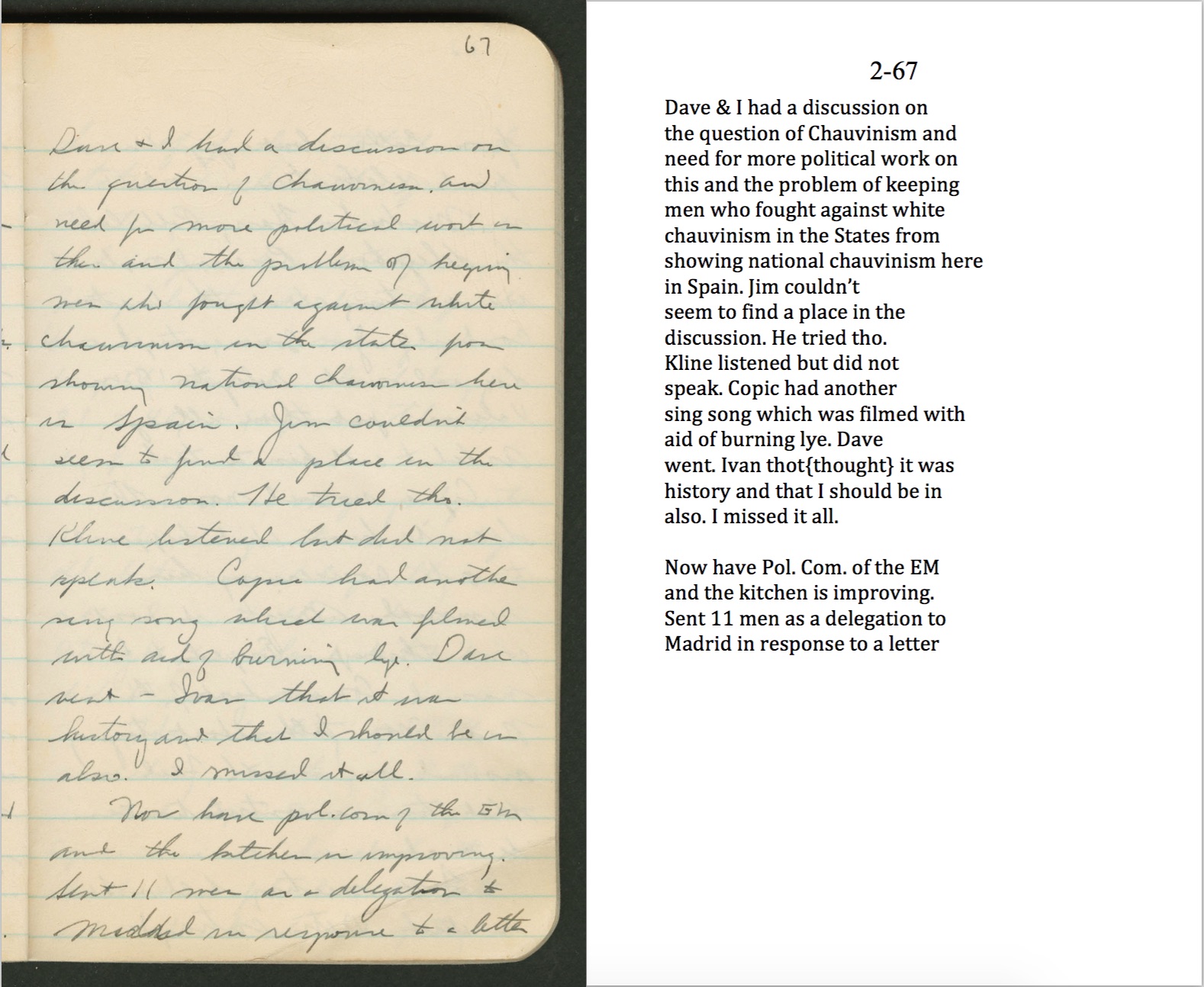 Merriman continues with activities on the evening of October 28 when they had an impromptu fiesta with songs.     Three birthdays were on this day, Crespo, Lieutenant Juan Abad Garcia, and a Captain “Baltea” who is Alfredo Captain Balsa.   There was singing of flamenco, Classical Spanish and “darky” songs.  This shows that even politically advanced and intelligent people would revert to anachronistic descriptions of negro music.   While Copic tried to flatter Major Crespo, Crespo turned around and looked for Merriman and Doran to flatter him and say what a great job he had done in the rear at Quinto.   Merriman is clearly never going to be friends with Crespo, even on his birthday.

On the evening of the 28th of October, American photographer Herbert Kline, and Frenchmen Henri Cartier-Bresson and Jacques Lemaire arrived to shoot a film.  This was discussed on October 10 in merrimandiary.com but clearly that was too soon.   Cartier-Bresson’s film is copyrighted by the Abraham Lincoln Brigades Archives and clips have been shown variously on the web.  Many of the scenes were staged on the parade grounds in Quinto and Merriman reveals here that he also staged some of the scenes which involved medical units and ambulance evacuations.  The writer’s father took part in the movie and was seen in some of the parade ground scenes.

Merriman is taken with Cartier-Bresson’s wife, Ratna Mohini, who was from Java.  She is not impressed with war or soldiers and must have been quite outspoken.   She claims that the Chinese will never accept communism because the family was more important in Chinese culture.   Mohini may be read in retrospect as being astute on this issue on the Chinese.  In a sentence which may or may not be transcribed correctly, Dave Doran acquainted her with the class basis of war.  The diary is clear that the filming took place on October 29 and was completed in one day’s filming.

On the 29th, Bob Minor shows up with a “pretty Russian woman” and her husband who was doing assignments for the Russians.  There is a photograph of the three of them in Quinto.  To date, we have not determine the Russian comrades’ names.

In the evening of the 29th, Copic held another sing along for the movie by Cartier-Bresson¹ and two frames of the movie show American Joe Taylor singing with a guitar being played.  Joe Taylor was presumably singing the “darky songs”.  It is ironic that Merriman chides Cartier-Bresson and LeMaire about the Chauvinism of the Americans to the French and Spanish, when these comrades have dealt with the racism in the US.   It is probable that they were prompted on this issue by Andre Marty who always felt the Americans could not rid themselves of their national identity.   In the photo on the right, Vladimir Copic is singing heartily.

Copic liked to sing opera but in the movie, Crespo is on Copic’s right and is also singing so it is likely they are singing patriotic songs.   Dave Doran viewed the event as historical, which it certainly was.  Ivan Rujevic (John Gerlach) agreed and thought it was unfortunate that Merriman was sick and was not available to be filmed.  However, the final cut of the film has a significant section with Merriman in it and he is speaking to the troops in front of a church in Quinto.

In the rest of the 30 October pages, Merriman gets back into Brigade Politics and reveals that Comrade Ivan doesn’t believe that Merriman is doing the work of a Chief of Staff.  Ivan believes that his “department” (the Division commissariat) supports Crespo over Merriman.  The vote of confidence must have disturbed Merriman.