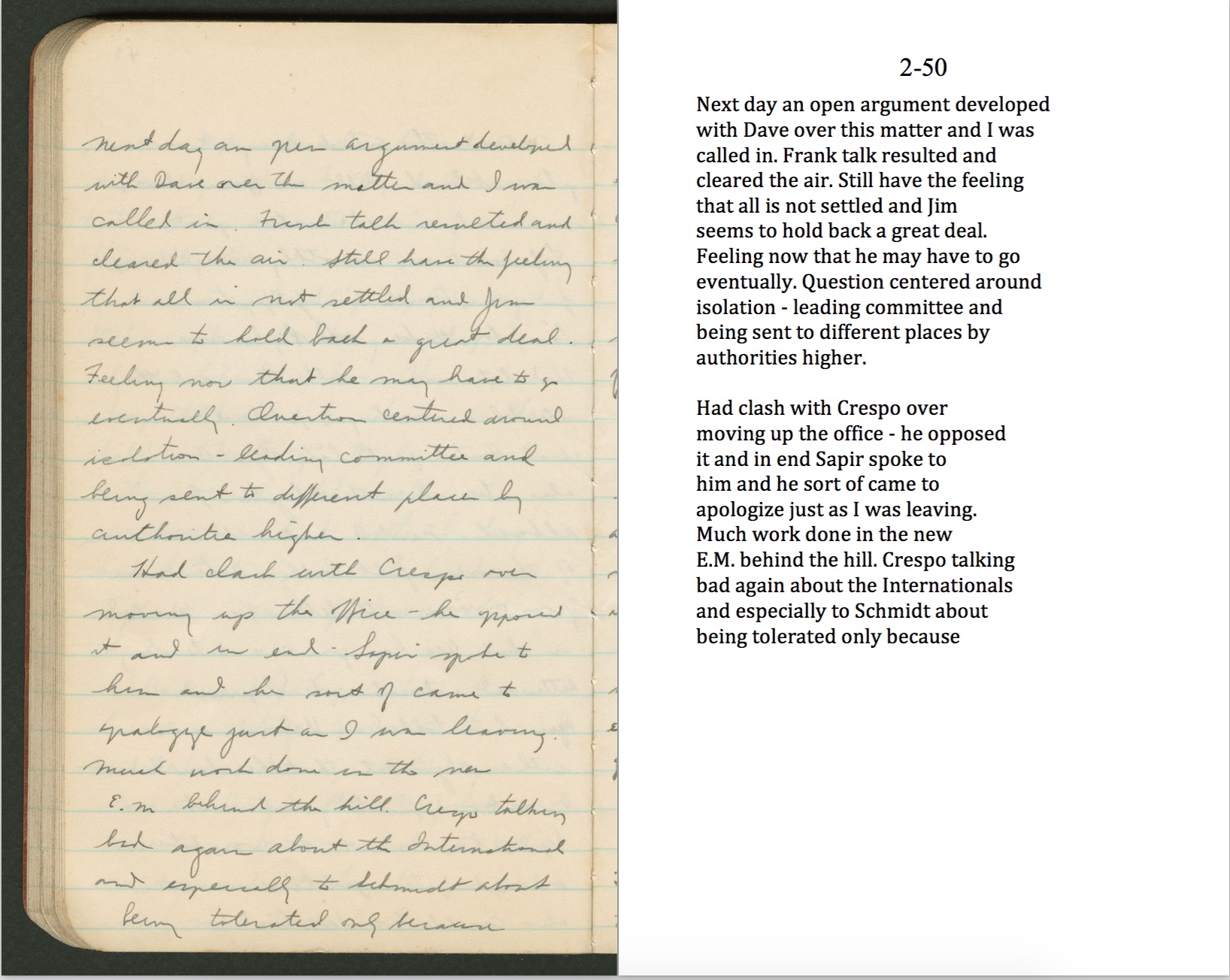 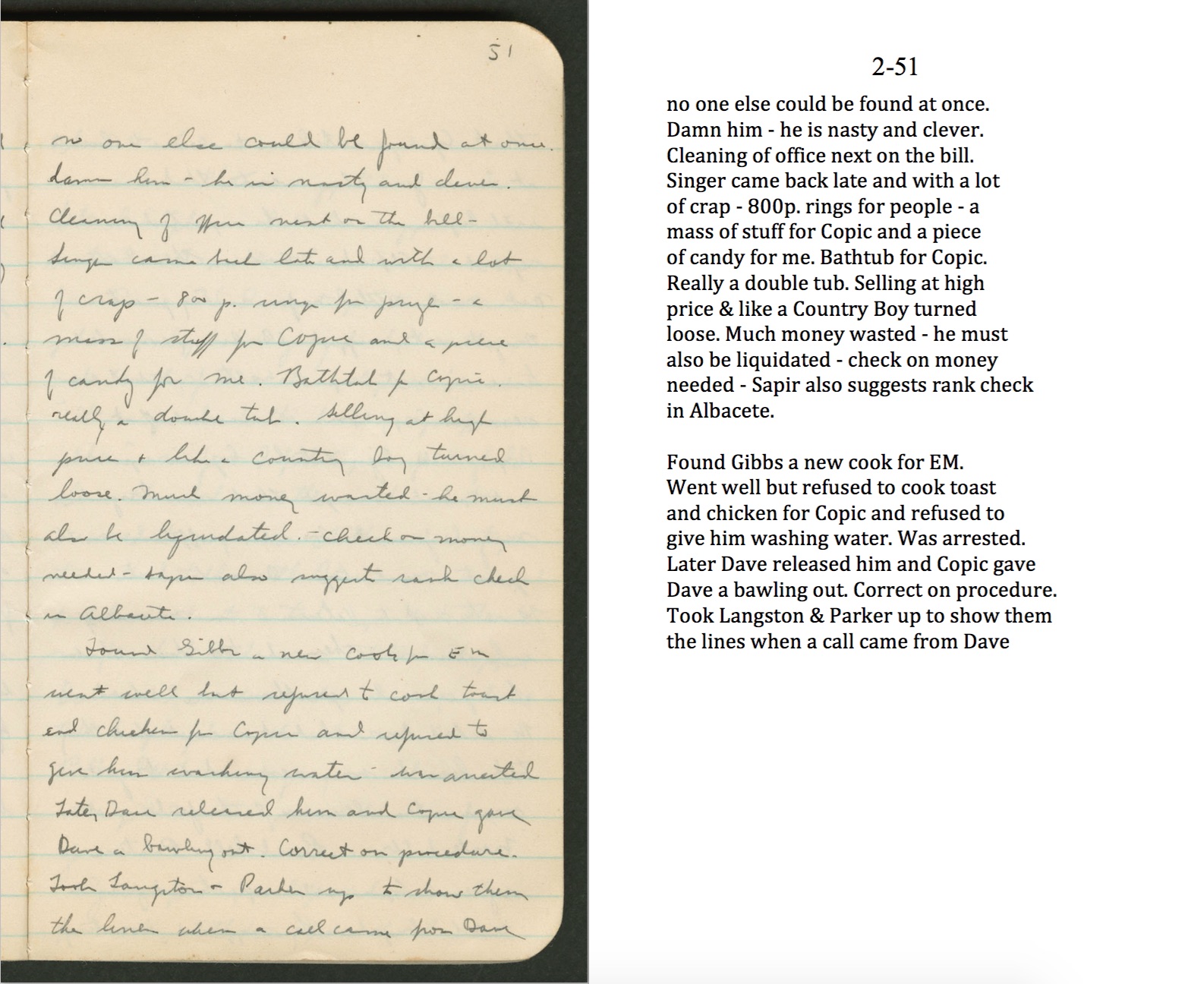 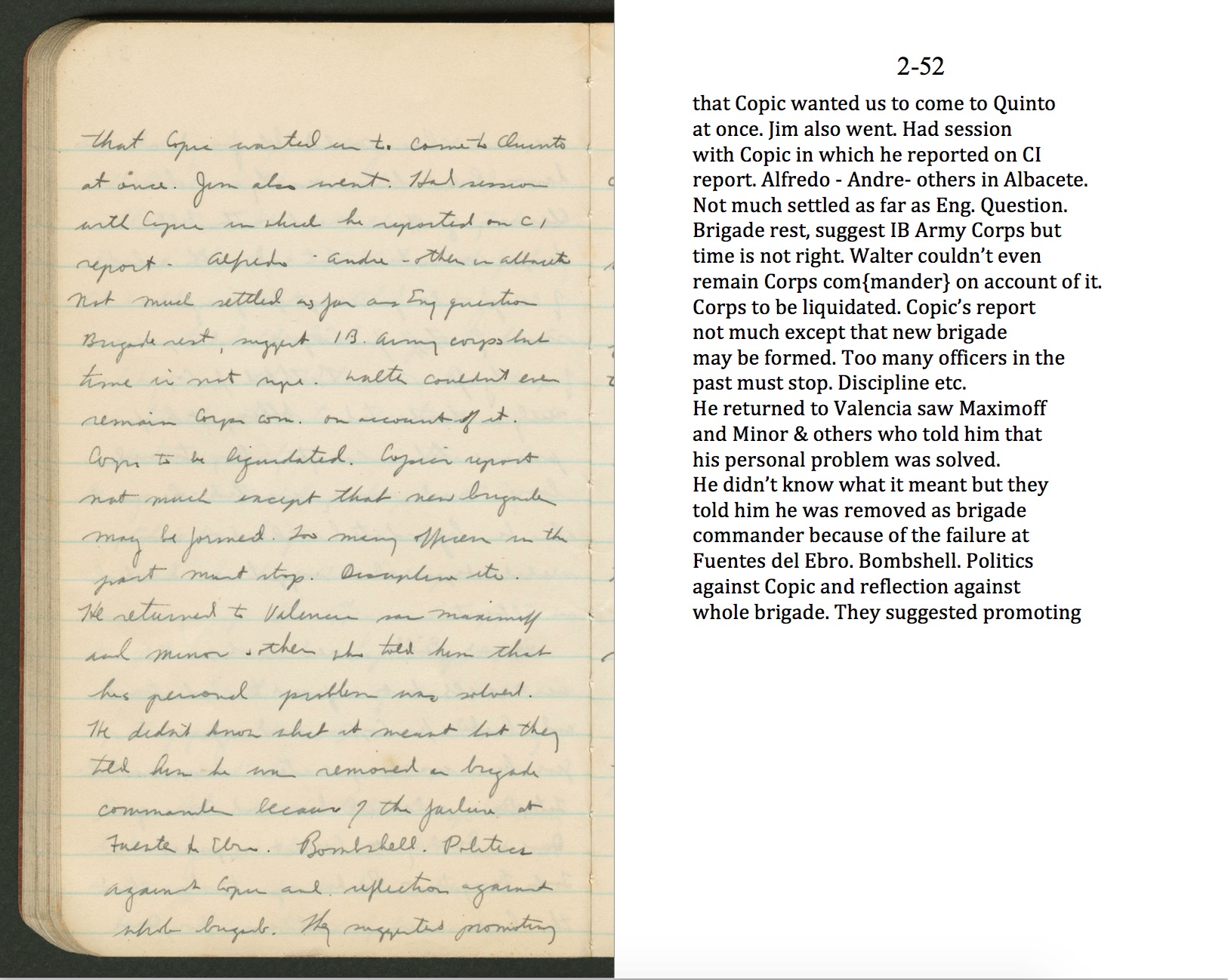 The discussion with James Bourne about his separation from the military aspects of the Brigade carried over onto October 21st and beyond and Dave Doran must have gotten into a fight with Bourne.  Merriman was called in.   Merriman feels that Bourne is not telling him everything and that he may have to be moved out.  Bourne holds out for the isolation of the Party members from the Brigades and this will not set well with those on the front lines.  There was instruction from the National Parties to remove important cadres from the lines in order to protect leadership talent.  Merriman said that Bourne is intimating that he is under orders from people who are much higher up.

Major Crespo, the 2nd Chief of Staff of the Brigade, did not agree with Merriman’s moves of the Estado Mayor.

Merriman appears to have moved the office staff up from Quinto to these tents which were behind the hill south of Fuentes but still out of the range of the Nationalist Artillery.   Merriman says that the move has been effective in getting work done.  He gets Moises Sapir to intervene with Crespo.  Crespo insults Egon Schmidt who would have been a Captain on the staff at that point.    Crespo says Schmidt is only tolerated because they can’t find anyone else to do his job.  Schmidt was not in favor since he was found in Valencia with a Yugoslav comrade and did not have permission to be there. Merriman is looking to “clean the office” which seems doubtful will be done with a broom.

Bernard Singer who has returned from Hospital was sent on errands by Copic and he returned with all types of loot.  Merriman appears to be furious.  Rings were purchased which cost 800 pesetas each and recall that this is a month of officer’s pay.   Copic gets himself a double sized bathtub,  Merriman gets a piece of candy.   Merriman says Singer will be liquidated.  Sapir suggests that a check be done of Singer’s rank to see whether he is holding himself out at a level above what was formally approved at Albacete.  In September 1938, Bernard Singer, a soldado, was killed on the Ebro.  Merriman says he was like a “Country Boy being turned loose”.

Merriman gets “Gibbs” a new cook for the Kitchen.   This is possibly Theodore Gibbs, although he is not listed on the kitchen staff in the Brigades, he is listed as an ambulance driver.  Merriman has mentioned a negro on the previous pages as a writer who came up and wanted to be a Lieutenant and drive ambulance.   We believe that this is Eduard Luchell “El Fantastico” McDaniels.

In any case, Gibbs crosses Copic by not getting him enough hot water so he can enjoy his large, new bathtub.  Copic has him arrested.   Later Dave Doran intervenes and has him released, but Merriman sides with Copic in that an order was given and not followed.  The personal dynamics between Doran and Merriman are illuminating here.

Merriman takes Eric DeWitt Parker and Langston Hughes up to the lines but gets called back to Quinto to have a meeting with Copic and Jim Bourne.   Copic explains what happened in Valencia at the Comintern meeting.   “Alfredo” and Andre Marty came to Albacete and apparently nothing was decided whether the British would get their six month repatriation decision.   Copic’s suggestion that an army corp made up of the International Brigades was rejected.  General Walter may not stay with them at all as the Army Corps that they are in at this point, the 12th, is being disbanded.   Merriman says that Copic returned to Valencia and met with Comrade Maximoff and Bob Minor and others.  He was informed that a new Battalion might be formed and that his own “personal problem” was solved.  Copic had used terms like being stateless and having nowhere to go, it is possible that this personal problem was his future career in the Party.

Then Copic drops the bombshell that he himself has been removed as Commander of the XVth International Brigade for the failure at Fuentes de Ebro.   Copic suggests that Hans Klaus will replace him and it is possible Copic will move up to command a Division.  Copic says he suggested Merriman become commander of the XVth Brigade. Whether any of this story has real substance is hearsay, since none of it actually happened.  Instead Dave Doran and Merriman write a letter to Valencia (presumably to Bob Minor) to object to this change and to see if they could stop it.   Copic makes a remark that if he were a professional soldier, this would “break his heart” but Merriman doesn’t buy it.  He thinks Copic is actually relieved to be able to move out.   Merriman talks to Denis, the Accidental Jefe of the Division, and gets himself a salvo conducto to go to Valencia and make the case to keep Copic.    Merriman and Doran wonder if Bill Lawrence, the American responsible in Albacete, was behind the move to get rid of Copic.  Lawrence might have seen enough of the friction when he was at the front just before the attack on Fuentes de Ebro.   It is interesting that after all the attempts to move Copic out, now Merriman and Doran are loyally trying to save him.   They may have been afraid of having Hans Klaus or Juan Crespo put in charge.

In a final note for this day, Merriman says that John Quigley Robinson would be leaving to go to Valencia and then on to Moscow as part of the delegation of American Communists attending a Politburo meeting there.   Merriman would have liked to go.