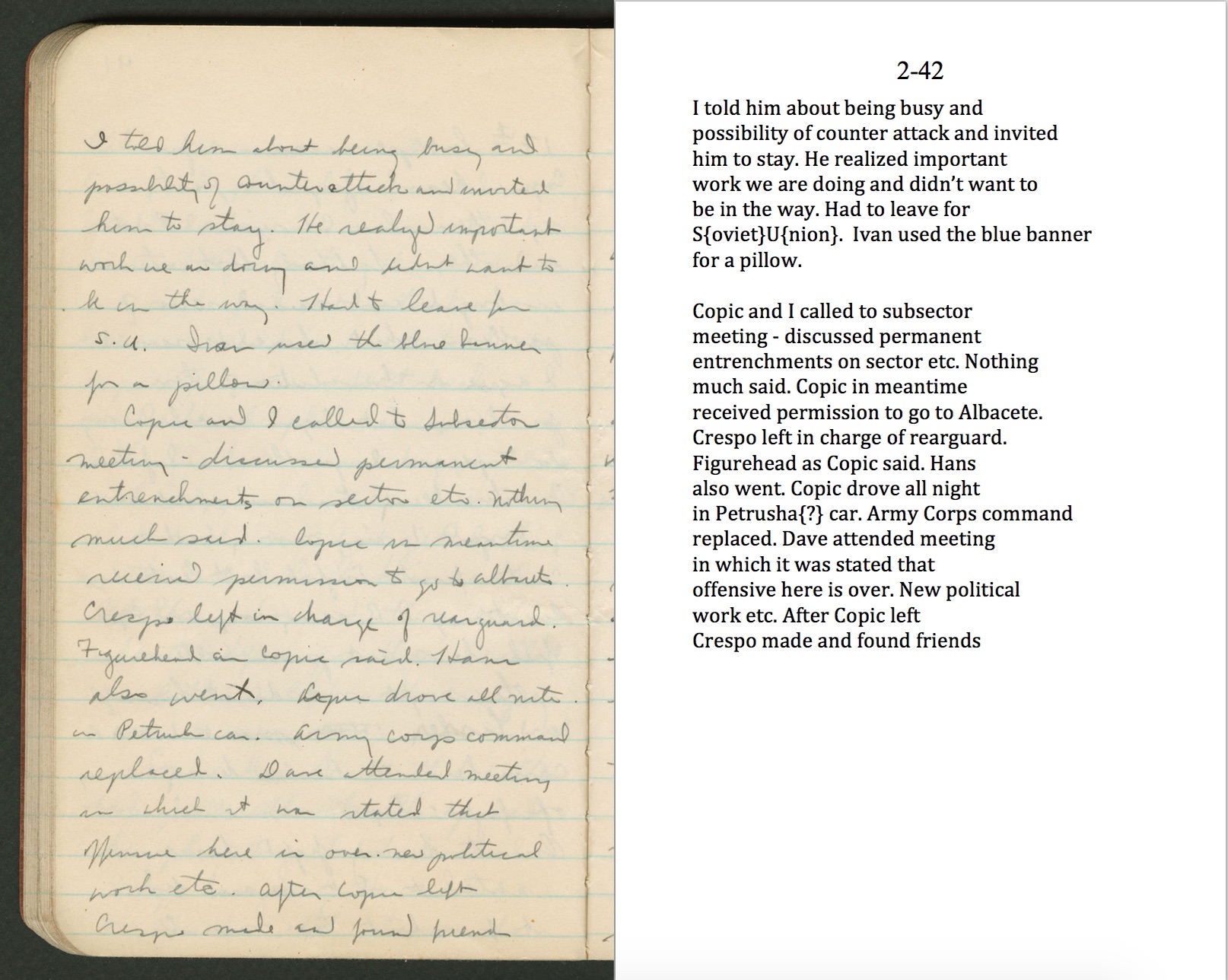 Merriman caught up his diary by October 19 at the end of the Fuentes de Ebro action.  We place the remaining pages on the 15th although they could have been days later.

Merriman catches wind of Vladimir Copic wanting to leave for Albacete to take part in a party meeting and celebration of the first anniversary of the founding of the International Brigades,  in which Yugoslavian delegates would be present.  Indalecio Prieto, the Minister of War, would also be present at this high level meeting.  The meeting was a veritable “Who’s Who” of the important people in Spain.  Merriman says Copic lost interest in the action at Fuentes and just wanted to leave.  Copic wanted to push General Walter into claiming the need for a new Army Corps (which Walter would lead) that would contain all the International Brigades.  Copic feared that Walter would never make such a demand at a high level meeting and Copic wanted to go push him.   Copic reveals that the XVth International Brigade’s time on the Aragon front is coming to an end and that in a month they would return to the Center Front near Madrid.  Copic as we will see wanted to distance himself from the disaster of Fuentes del Ebro and feared that he would be cashiered for that failure.  The quicker he could pin this on his subordinates, the better.

Merriman says that David Lasser, head of the Workers Alliance of America, is in Quinto and Fuentes to interview the troops.   While Copic is said to have remained in Quinto throughout the whole Fuentes de Ebro fight, Lasser came with a blue banner which must have been awarded to the Brigade.   They were, in fact, preoccupied with fighting a war at the point of his visit and Lasser had the sense to know that he was in the way.  He left and Comrade Ivan (Ivan Rujevcic or John Gerlach) slept overnight using the blue banner for a pillow.

Again, Copic and Merriman were called to a meeting to talk strategy of their “sub sector”.   These meetings don’t impress Robert Merriman.   Copic, however, used the meeting to gain permission to go to Albacete.   Quinto is left in charge of 2nd Chief of Staff Luis Crespo Torres. Both Copic and Merriman now call him a “Figurehead”.  Copic left for Albacete in something that looks like “Petrusha” or “Petruska”, which could be a Soviet automobile.  Also possible as a transcription would be “Patrulla” which would be a police car.

Merriman relates that the Army Corp command has been replaced.  At the start of the Aragon, the Army Corps was led by General Pozas and it soon will be official that he is out.   Merriman is told by Dave Doran who was at the meeting that the Aragon offensive is now over.  The Euskadi campaign also was winding down with the fall of most of the major cities in the Basque Region, so any diversionary value of the Zaragoza offensive was now over.   Consolidation of the held territory around Madrid was now imperative.

While Copic was away, Major Crespo was at play.  Crespo got himself appointed to Chief of Staff of the Army Corps jumping over the Brigade.   He will lead four brigades and the supporting artillery and armor.  Merriman is taken by surprise but not by Crespo’s careerism.  Merriman says Crespo will always find a way up and Merriman hopes it is up and out.   Merriman says that a letter arrives for Copic from Denis and gives the name of the replacement “advisor”.   Merriman is surprised that the name would be put down on paper.  The letter has not been found in the RGASPI archives.

A name transcribed as “Garens” left for Valencia to bring up 510 new recruits.   It is more likely that this is “Givens” or John Givinovitch, who was in Transports.   Milt Wolff says that he doesn’t recall any replacements coming up but Art Landis clearly was interested in this large increase in the Brigades.¹   On October 6, a series of telegrams from Albacete let the commanders know that nearly 3000 new recruits had been drafted in Draft #25.  It is likely that these new recruits are Spanish and will be the fresh faces seen in Quinto over the next few weeks.