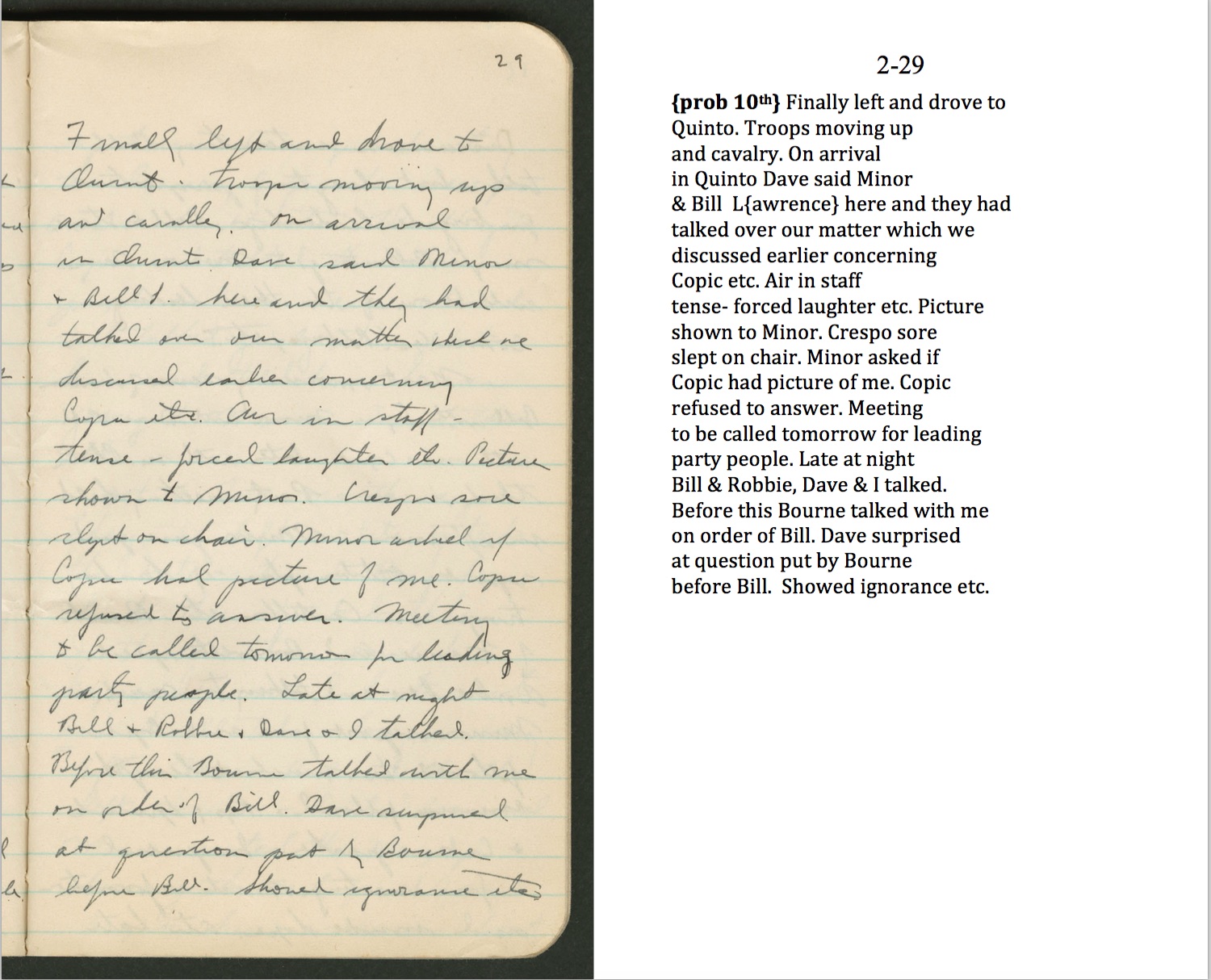 The XVth Brigade arrives back in Quinto.  Accompanying them is Bill Lawrence from Albacete and Bob Minor from Valencia.   Many, many photographs are available from this visit and Bob Minor is widely photographed in the area.  In addition, new arrivals show up at Quinto from Albacete to join the Lincoln-Washington Battalion and Henri Cartier-Bresson, Jacques Lemare and Herbert Kline are there to make a movie of the Brigades.   Iconic pictures and movies of the men marching and training are seen outside the cemetery at Quinto just to the north of the Church.

As a personal prerogative here, I include a single frame from the movie that Cartier-Bresson is shooting and the man who is circled in the photo is the writer’s father, Harold Hoff, who has just come to Quinto from Tarazona de la Mancha.   He has been in Spain for three weeks and will go on the front lines in 3 days.

Merriman says that the staff meeting they held with Bill Lawrence and Bob Minor was tense.   The staff were trying to remove Copic from command and have him replaced.   Copic showed a picture, presumably one of the many of himself, to Minor and Lawrence.  The air was frozen.  Minor asked if Copic had one of Merriman (knowing full well that Copic did not allow photographs of Merriman to be taken at Belchite).  Copic did not answer as he knew that he had blocked photos to be taken of Merriman.  It is probable that Sandor Voros discovered the lack of photos of Merriman when he was attempting to put an article together on him for the Volunteer.  On the 24th of September orders were given to photograph all the heroes of the Belchite battle and the fact that no photo was taken of Merriman would be extremely galling to the Americans.

After the meeting the Americans talked.  Bill Lawrence, Robbie Robinson and Dave Doran met with Merriman.   Jim Bourne had been ordered by Minor to talk to Merriman.   Some question that Bourne had asked of Lawrence was inappropriate and he was apprised of that later.   Merriman’s opinion of Bourne as a political neophyte is reinforced.   It appears that Steve Nelson, Bill Lawrence, Dave Doran and Robbie Robinson may be sent to Moscow for upcoming Party meetings.  The 12th Plenary Session of the 17th Congress of the Communist Party was being held in Moscow on October 11th and 12th.  For them to make it to Moscow for this plenum would have meant flying there.  There is no evidence that Steve Nelson, who was wounded in Belchite, went on this trip and Bill Lawrence did not leave Spain until November of 1937.   It is possible that this talk was meant to be a morale booster for the Americans in Spain and that they had access to political power that they were not finding in Prieto’s Spanish Military Command.