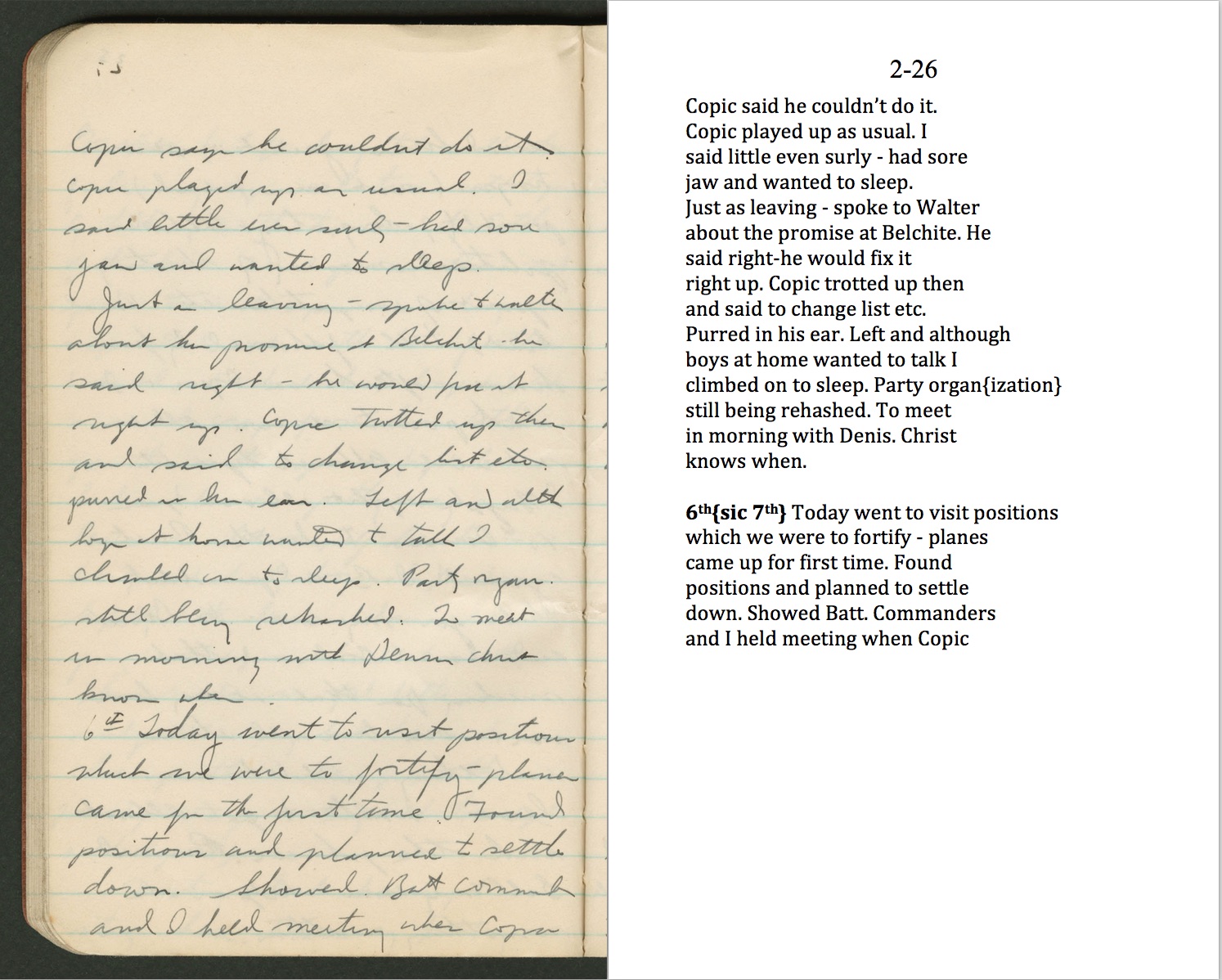 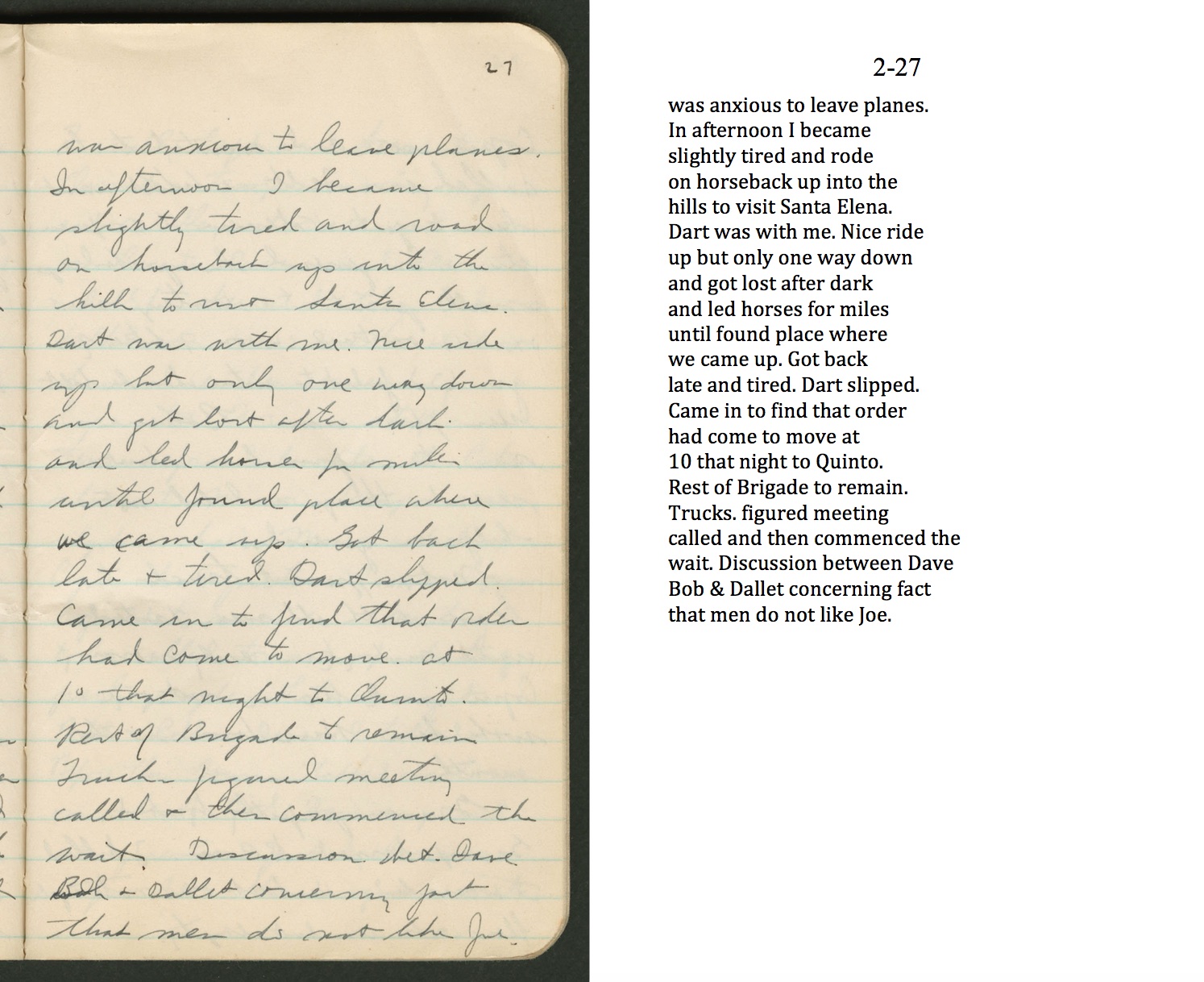 Merriman loses count of his days and enters “6th” for the second time.  We will assume it is the seventh or eighth but must have been before the 9th as he says that they will be moving out on a following day.  The XVth Brigade moved to Quinto on the 10th of October.

Merriman begins setting up positions for a long stay in Senes and on the Huesca Front.  He meets with his Battalion commanders to lay out the lines.   Assuming that he has gone back to Senes on the 7th as he said on a prior page, it is likely that these positions are in the hills to the west of Senes and towards Zuera.   Ironically, this on the Sierra du Alcubierre where George Orwell was first posted in the Fall on 1936 and were lines held by the POUM and Anarchist Divisions.   Merriman does mention seeing FAI symbols written on the walls of his HQ in Senes.   If one looks carefully at the photograph of the trial held in Senes on previous days, one can see slogans painted on the walls of that room and painted over later, presumably by the Republicans.

Merriman says that the HQ was bombed during the meeting and Copic cut it short because he was afraid of the planes.   Merriman and Dart get horses and ride out to look at “Santa Elena”.  Thanks to help from Marisa Biosca, Ermita Santa Elena has been located on a Google Earth map.   It is 4.3 kilometers from Senes as the crow flies and on high ground.   As the sun goes down, Merriman and Dart get lost and have to lead their horses out on foot as they make their way down the hills in the dark.   Should one want to find Santa Elena, it is on a bicycle route now through the wind power generators of Aragon.

When they get back they find that orders have come for the Brigade to move out to Quinto, in preparation for the offensive which will come in a few days at Fuentes del Ebro.   All the planning of positions in the Huesca Front come to naught.  Merriman says “Rest of Brigade to remain” so only part of the Brigade is to move although the Americans, British and Canadians all were on the front lines of Fuentes del Ebro.

They don’t move (and this could be as late as October 9) because the trucks don’t come.  Overnight, Merriman has a discussion with Bob Thompson, Dave Doran and Joe Dallet about Joe Dallet and the dissatisfaction of the men for his leadership.  Dallet will become a controversial figure about this time because of the continued questions on his leadership style.   Born to a middle class family (his father owned a lumber mill in New England) and raised in a non-proletarian setting, Dallet developed a working class manner in his union organizing in Chicago.   Many, including Merriman, found his style forced.  Steve Nelson recalled that when Dallet was in jail in Perpignan in Spain waiting to get over the Pyranees, he charmed his captors by playing classical piano (Chopin) extremely well.

Copic must have left the meeting when the planes came over but Merriman also must have continued the meeting.  Copic was furious.   He gave trivial reasons for being mad.  Bourne is solicitous to Copic which again irritates Merriman.

Trucks show up on the following morning (9th or 10th;  Landis places it as the 10th¹).  Copic is not woken and starts the day irritated.  His adjutant, Hans Kaltschmidt, takes the brunt of that irritation, apparently.

The town of Grañen was bombed with a railroad car destroyed, several dead and injured.  The October 11th issue of LaVanguardia in Barcelona makes the damage more deliberate:   the hospital was destroyed.  The planes were empty when they flew back over the XVth Brigade.   Merriman admires their accuracy.