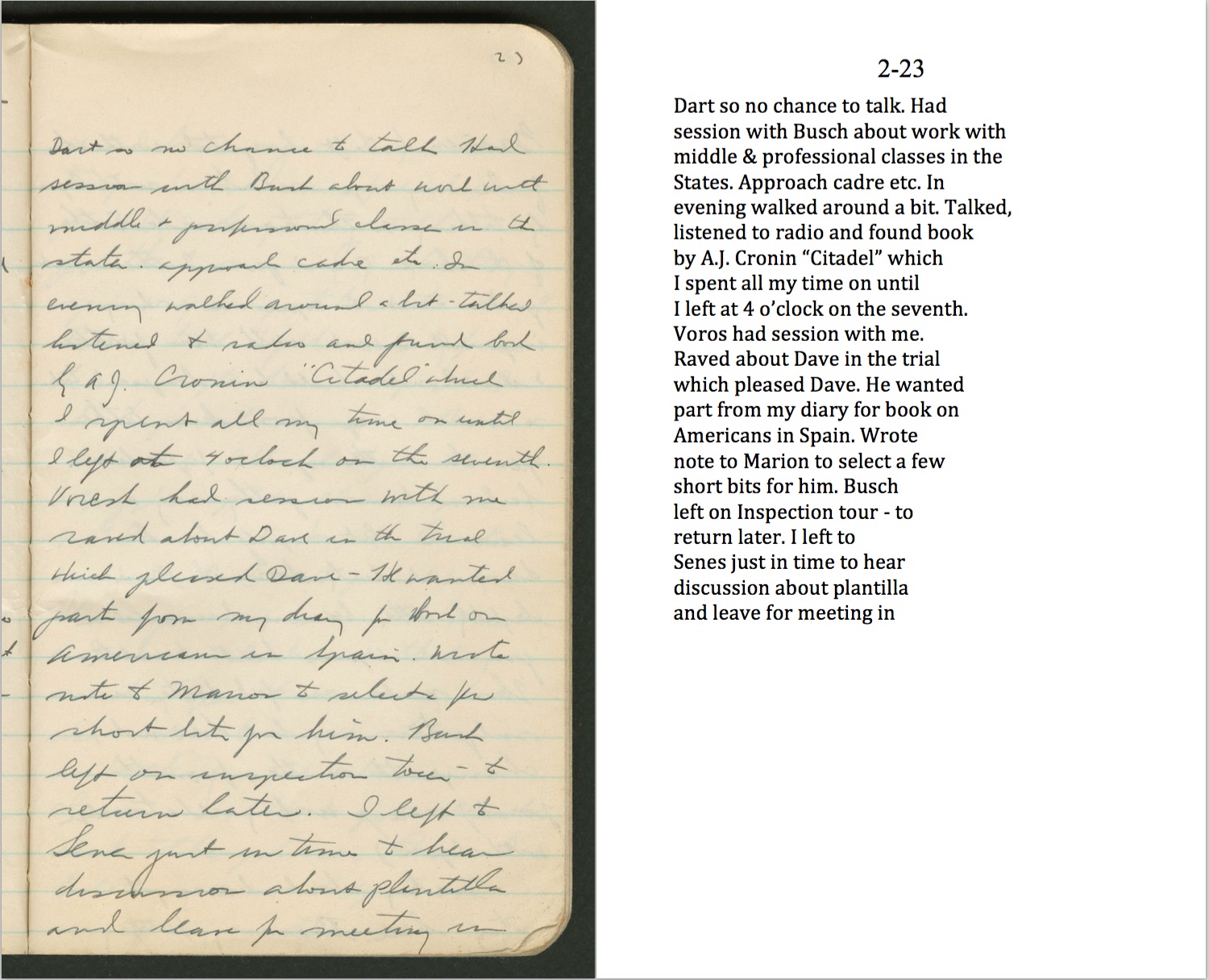 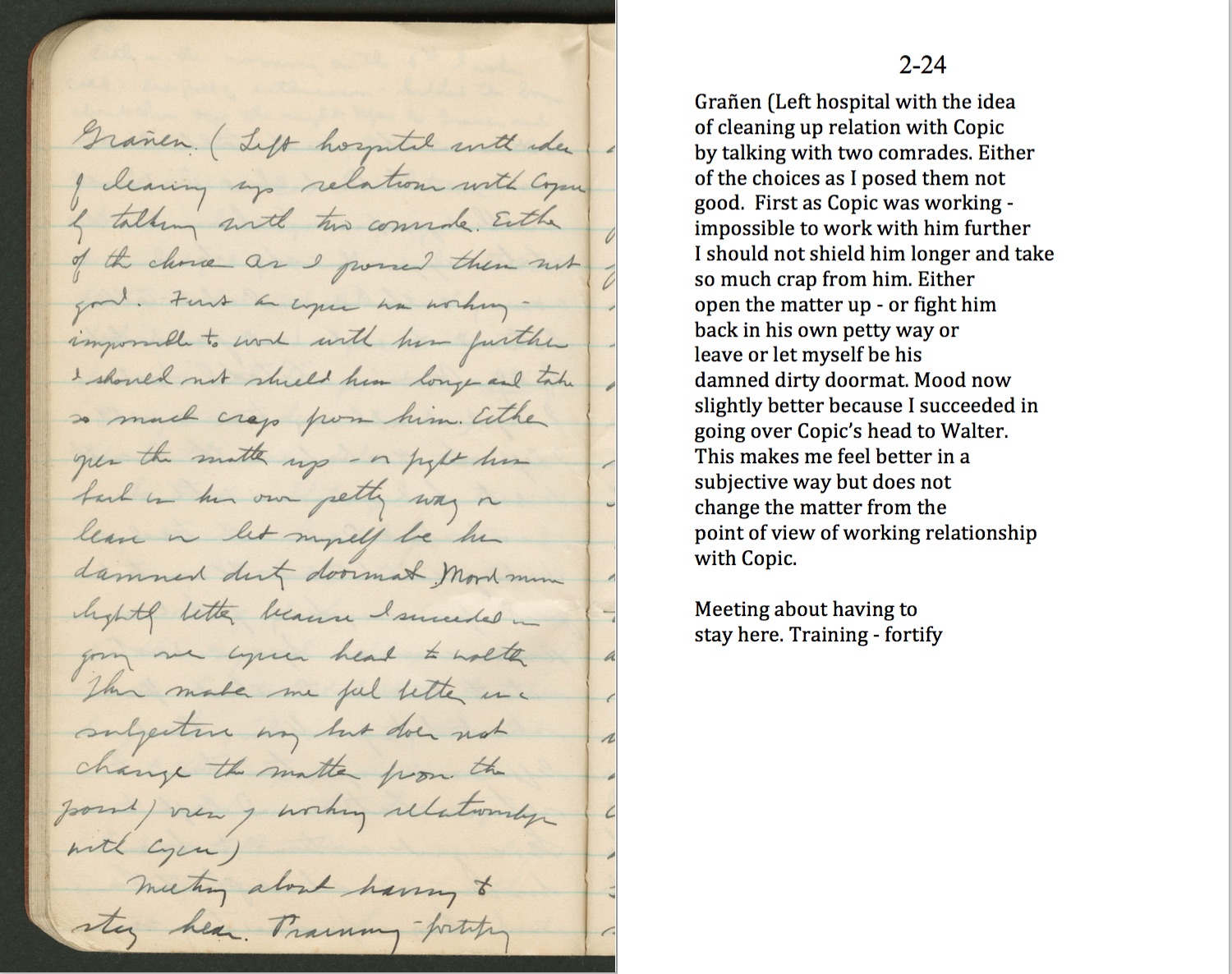 Bob Merriman is nothing if not resilient.  He recovers from his bout of fever in a single day and is up and about on October 6.   He wants to meet with his comrades but they all come at once:  Joe Dallet, Bob Thompson, Wally Sabatini, Lou Secundy and Rollin Dart.   Merriman really wanted to have a one-on-one with Dallet but it did not happen.   He did speak to Dr. Irving Busch about politics and the middle class in the US.  Merriman is trying to figure out what should be the approach for a cadre of the party if they were not working class or union men.  Busch, being a professional, would have a different experience than other comrades.  He read for much of the day and departed on the 7th to Senes.

Merriman meets  Sandor Voros (not Voresh) who was collecting stories for the Book of the XVth Brigade.  Voros said that Dave Doran did great in the trial of the deserters and Doran was pleased with the complement.   Merriman tells Voros to contact Marion in Albacete to get stories from his first diary.  Some letters from the first diary were transcribed for the Book of the XVth Brigade.   Merriman say that he heard the discussion about the “plantilla” in Senes.  This is likely a discussion over the staff lists.

On the way to Senes, Merriman goes to Grañen and wants to have it out with Copic over their working relationship.   In a bit of a temporal mashup, Merriman says that his attitude is better since he spoke with General Walter.   This comes a few pages later in the diary again.   Merriman apparently met with two of his comrades about what to tell Copic… lay down the law or leave (or be a doormat), none being pleasant options.   A meeting is held at dinner in Grañen and there is the possibility that they will stay in these positions for some time.  They discussed morale issues at dinner, the politics of shooting competitions etc.   In another example of punctuation matters, this can be read to say they discussed the politics of the shootings, meaning the execution of the deserters.  It also can be read to be the politics of shooting competitions, etc.   Since it looks like none of the deserters were actually shot, we might safely take the latter interpretation of the sentence.

After dinner, Copic and Merriman have their one-on-one.  Copic grouses about the situation in Albacete and a word here is unreadable (it looks like dynalite, but that makes little sense).  Copic tells Merriman that Indalecio Prieto, Minister of War, is against the International Brigades.  There are rumors of the government leaving Valencia and moving to Barcelona or, worse, to the French border so that escape would be possible.    Copic relays his fears that the war is being lost.   General Walter has lost a battalion to the 45th Division which is being split off and moved to the southern fronts.  Copic notes that the International Brigades are all over Spain and would benefit from being combined into a single Army Corp under General Walter.   Copic says that General Gal may come up to help the XVth Brigade.  In reality, Gal had already been removed from the Army Corps.

Regarding speaking to Walter, Copic didn’t actually talk to him for Merriman and said he couldn’t do it.  He made excuses which clearly Merriman did not want to hear.  Merriman says he spoke little and verged on being surly.   But as he left, Merriman got his chance to speak to Walter and remind him about his promise at Belchite.  To Merriman’s pleasure, Walter said he would fix it right away.   He must have spoken to Copic and Copic responded like it should have happened already.   Copic tells Merriman to change the lists of promotions.    Merriman is tired but says that he will speak to Arturo {the Polish comrade, Adrienne} Denis.   It looks like he says “Christ knows when” but the hope for Merriman is that he will find out when the promotions are made.   Denis marked up the promotion list here.

(Note that the second “6th” is in error and is likely to be on the 7th or later.   Many dates in October are only approximations since the diary was undated and Merriman aggregated events when he had a chance to catch up the diary.