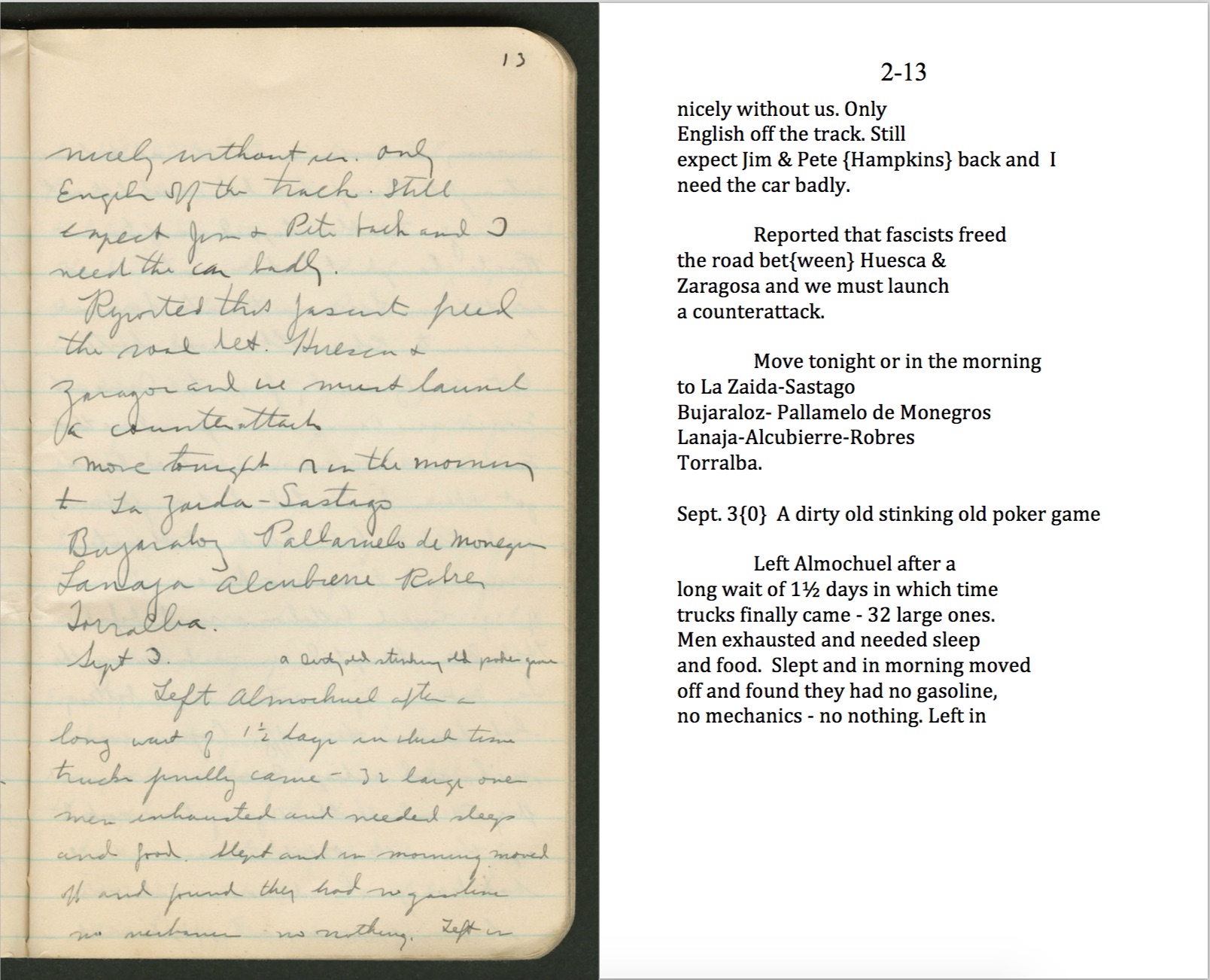 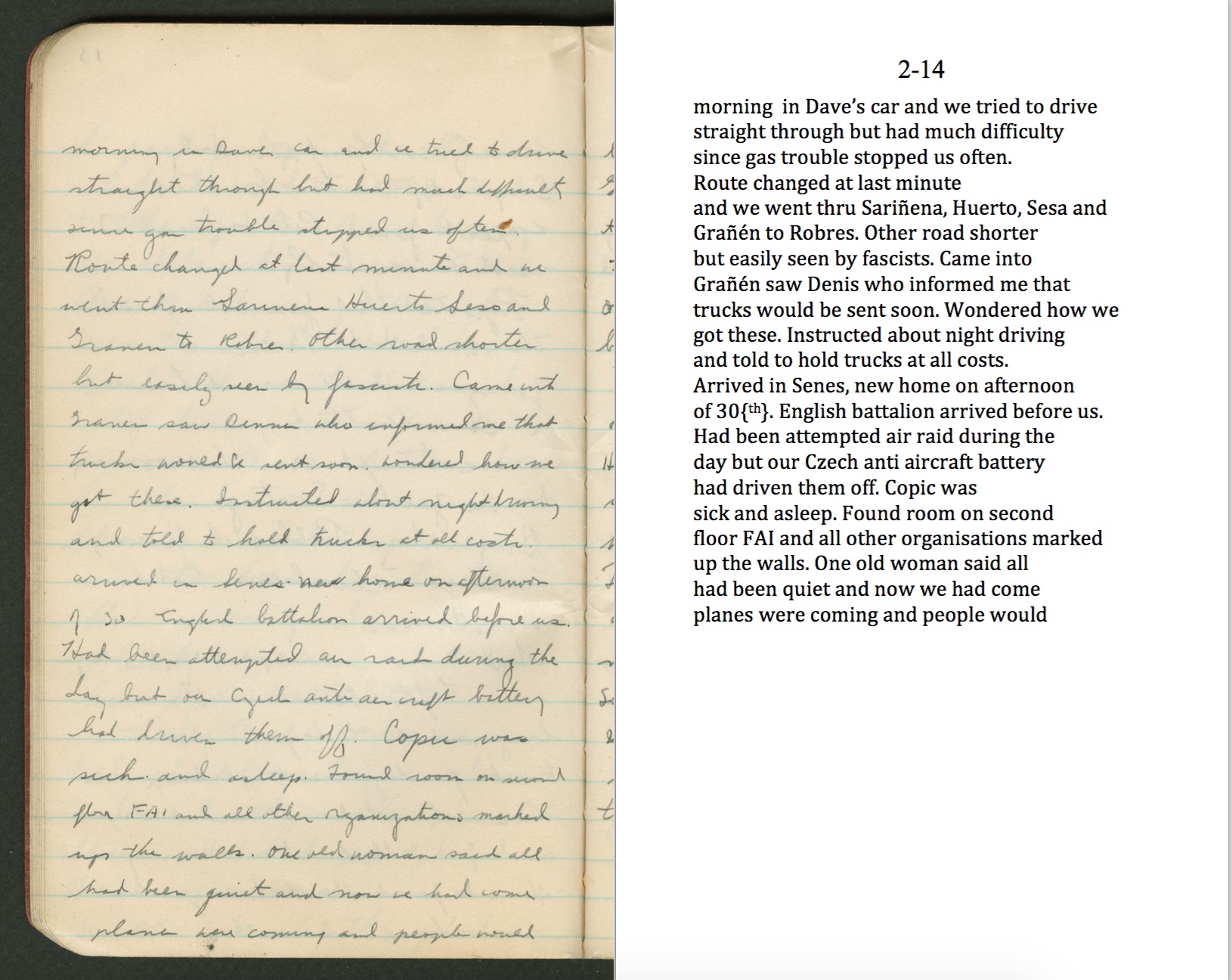 Merriman finished his thoughts on September 29 by saying that the Lincolns and the Mac-Paps were coming along nicely now but that the British still remained a problem.  Jim Bourne and Pete Hampkins were still in Valencia at the gathering there and Merriman was worried about when they would get back.  He had noticed that the Fascists had broken the hold of the Brigades on the road between Huesca and Zaragosa and that they would soon move up to counterattack and try to take back the road.  He gives us the route that they would take from Almochuel to Torralba de Aragón which was a distance of 135 kilometers (See the map below).

The plan was to move in 32 trucks on this route which circled the Aragon front at the end of September.  Merriman says that the drivers took a day and a half to get to them and when they arrived,  the drivers were beat.  They wanted to start out but the trucks were out of gas and the ones that had mechanical problems had no mechanics to fix them.  “No nothing”.

On the 30th of September, they started out with Merriman in Dave Doran’s car.  Because the Fascists had counterattacked north of Zaragosa, they had to swing further east and the route is shown in the next Google Maps® image.

Merriman meets with, we believe, Arturo Denis, the Chief of Staff of the 35th Division, who explained the transportation situation to him.  They were waiting on more trucks and Denis wondered where the trucks that Merriman had came from.  It should be noted that in the last two weeks in September, the Ministry of Defense was critically reviewing the number of cars in the field and reassigning vehicles to the officers who needed them.  When the Dimitrov Battalion was separated from the XVth, Copic demanded that they be stripped of their weapons and Merriman fought that as he did not want to leave them defenseless.  However, there is a command order of the 35th Division in late September which removed 14 vehicles from the Dimitrovs.  This is probably the source of Merriman’s trucks.  Denis told him to hold the trucks and don’t give them up because the XVth Brigade was going into reserve positions and might have to run back to Mediana (retracing the steps they just took) if the fighting there degraded.

Merriman places the men in Senes which is a few kilometers southwest of Robres and awaits orders.   He finds a headquarters on the second floor of a building.  There are not many homes in Senes and fewer with two floors.  It is likely that it was one of the ones on the right.   Copic is sick and is out of action.   The Brigade was bombed on the 30th but had support from a Czechoslovakian anti-aircraft battery (probably the Gottwald battery which had been based in Caspe).

Art Landis gives an overview of the next week:

On September 24, while Modesto fought before Fuentes and Sillero, the mixed Italian-Spanish Flechas (Arrows) Division, under the Italian colonel Isasi, attacked strongly in the direction of Zuera.  Isasi had the use of five squadrons of planes, many artillery batteries, and a complete company of tanks.  His objective was the Republican bridgehead across the Gallego River, which had severed the rail and road connections between Zaragoza and Huesca.  By September 29, since no attempt was made to re-enforce the exhausted men of Trueba’s 27th Division, most of Isasi’s objectives were realized.

…..  At the same time, a sweeping Republican victory was in the act of being won by a well-coordinated Catalan effort in the vicinity of the border city of Jaca.  …. But the Catalans not only held; they also began additional attacks to the south of Jaca and above Huesca.

It was at this time that the 15th Brigade was rushed to Grañen, in the area below Huesca.  It was supposed that it would be used either to implement and further the advance of the Catalans or to aid the troops of Trueba against the mixed Spanish-Italian division pushing from recaptured Zuera.¹

Merriman finishes off the entry for September 30 with the note that the old woman whose house they were using in Senes complained that things were quiet there and now that the Brigade has arrived, they will be bombed and killed.   Merriman confirms that the 35th Division hospital is now in Grañén and that Doctor Irving Busch is in charge of that hospital.  Busch, a long timer now in Spain, was influential in the International Brigades and could get things done politically as well.