The third English Speaking Battalion will come to be known as the Mackenzie-Papineau Battalion although they won’t be referred to as such for another week.  At this point, formation of the first company is at hand, and Canadian Niilo Makela has been named as the commander of Company 1.   “Coapman” is  Arthur Henry Coapman.  Coapman will go on to be a Mess Officer in the 2nd Training Battalion in Tarazona in August.  Wallach is likely to be Canadian Jesse Wallach who is being sent to Officer’s school.  Canadian William Skinner will be the commissar in the section.  We believe American Carl Bradley will become the Company political commissar.  Since the Canadian William Bradley had already been a disciplinary problem, it is unlikely he would be assigned this sensitive political posting.  On June 18, 1937, William Bradley was arrested for refusing to go to the front with the Washington Battalion.   Bradley was jailed for a month on June 19, 1937, and then expected back in Tarazona but he never showed up.  He was believed to be in England after deserting.²

Merriman says that he filed a 4 week plan of instruction for the Battalion with the Brigade Etat Major in Albacete.  We found this plan in the Soviet RGASPI archives and include it here for completeness.  This is copyrighted by RGASPI and is Fond 545/Opis 2/ Delo 268 pages 1-3. 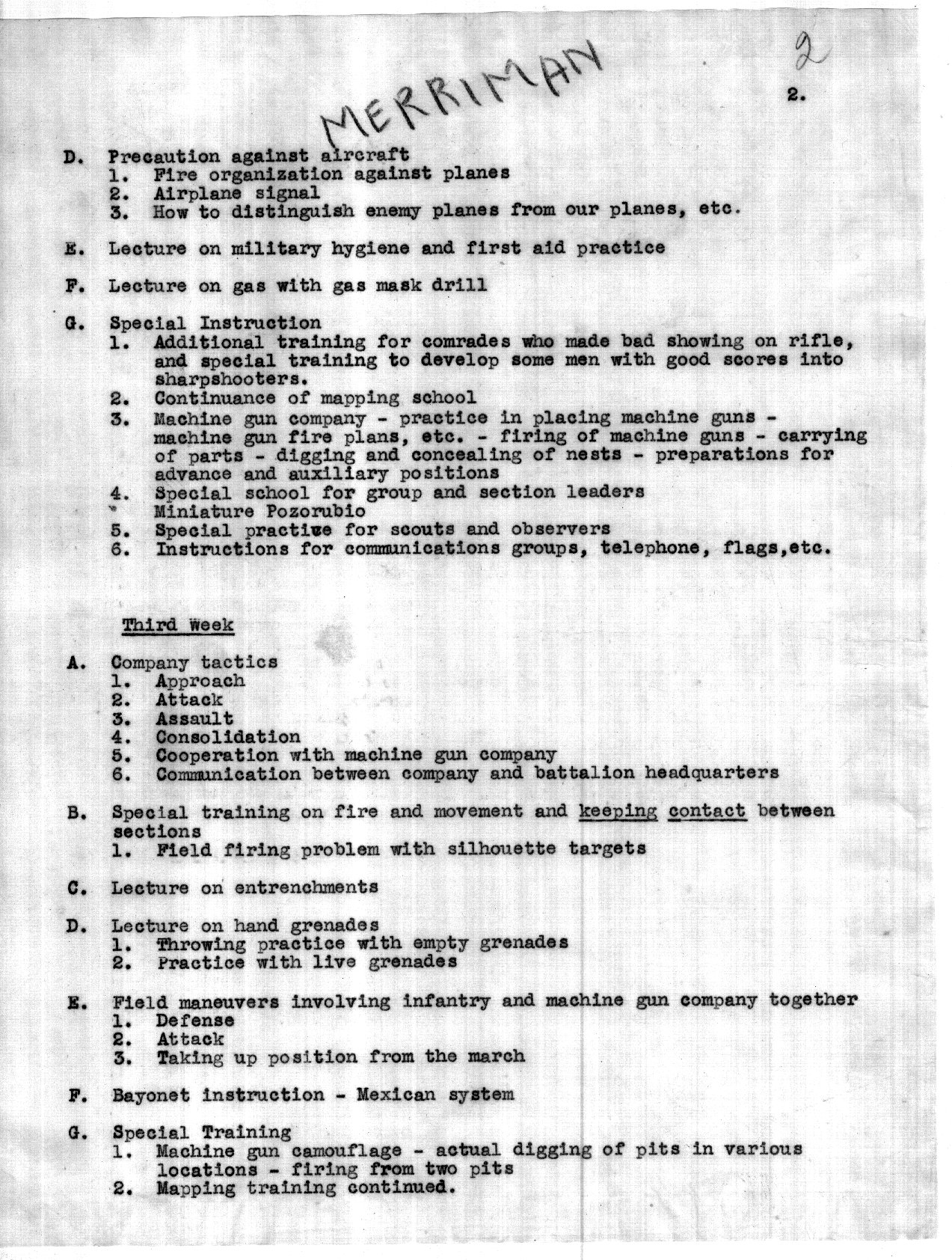 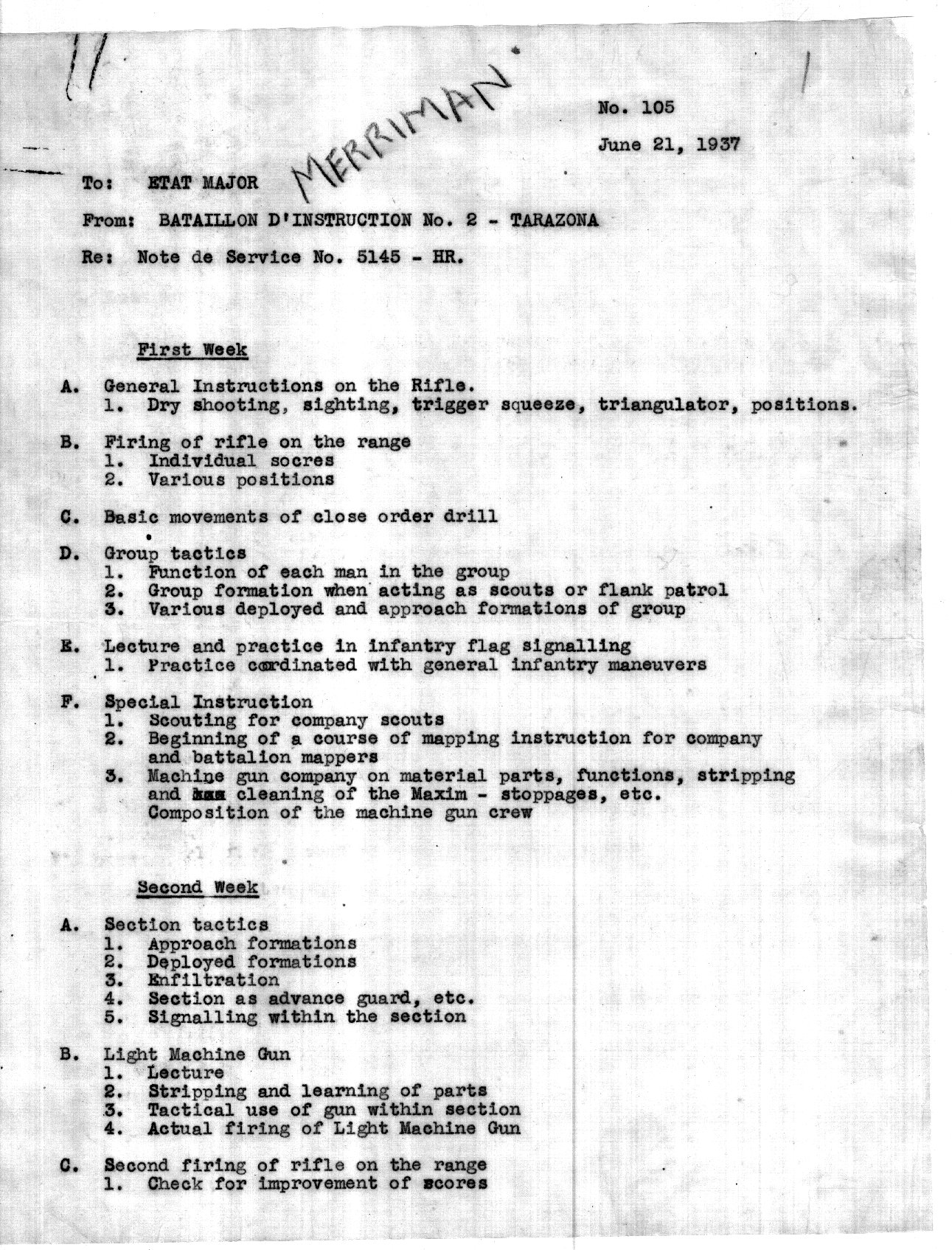 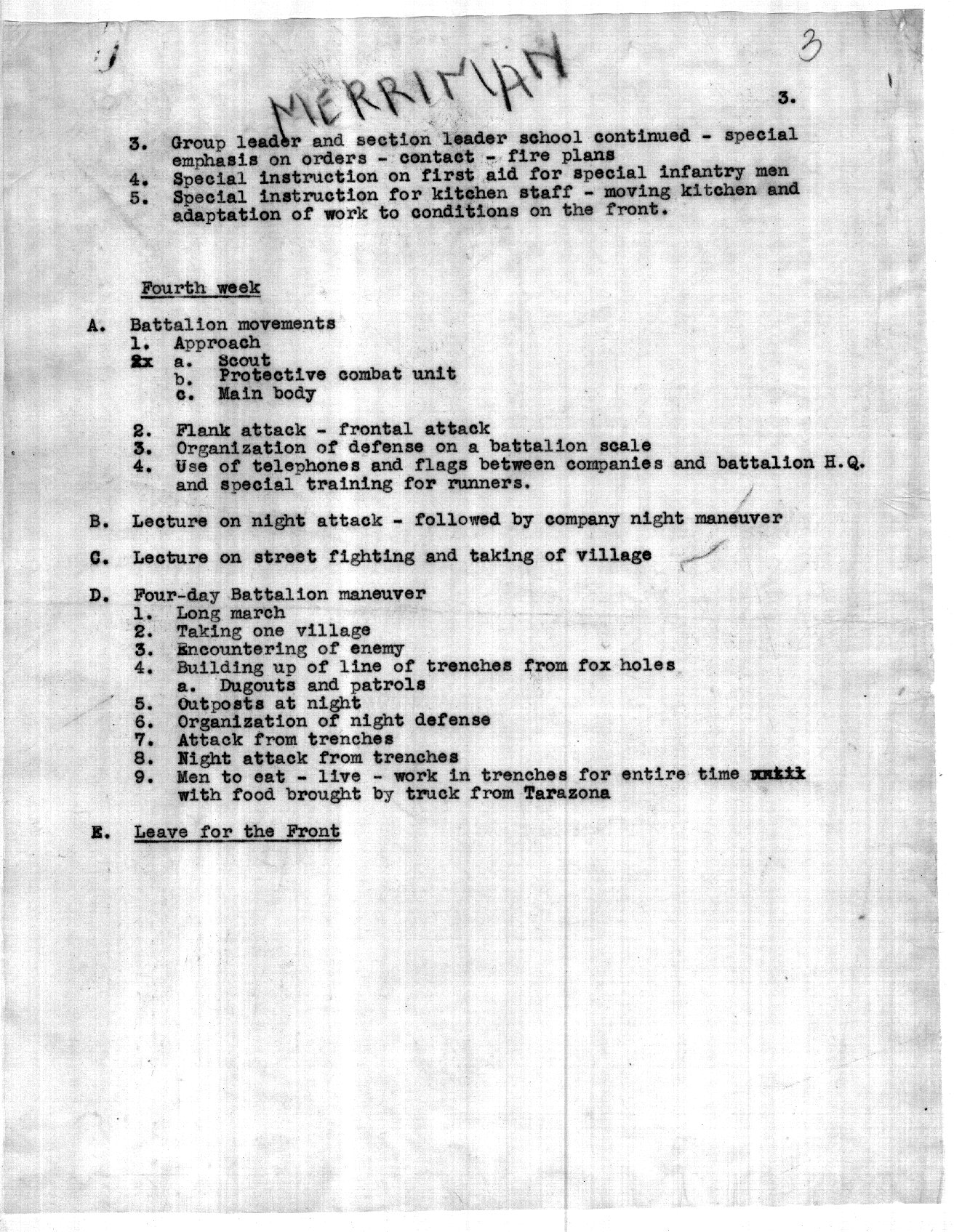 Merriman is still interested in gaining information on the failed coup against Copic so he drives to Pozo Rubio where Englishmen George Nathan and Tom Wintringham are leading exercises with Italian Lieutenant Umberto Mazzi, who was an instructor in the 45th Division.¹   Apparently, they were loose lipped enough to let their feelings out on the realignment of the leadership.  George Nathan wants to be Copic’s Chief of Staff with Wintringham as his Adjutant.  Since it is unlikely that there would be two Chiefs of Staff at the Brigade level, the next line “Johnson Chief” is confusing.  The Brigade will divide into two regiments and Nathan will lead one while Miklos Szalway (Chapayev) will lead the other.  Allan Johnson will remain in the school so it is possible that Merriman intended to say that Johnson would be Chief of Instruction.   Jock Cunningham is being proposed for a line command and George Aitken as a political commissar in the field.   The British say that they are against Copic and Klaus but it is likely that this is what Merriman just wanted to hear.  Cecil Eby’s review of this event says the British aligned with Copic.   Apparently Nathan tells Merriman that Vidal has told him that “Copic is in” and will be in charge of 1/2 the Brigade and that the “G” (which could be German Thaelmann or more likely, Italian Garabaldi) battalion would be split.   Merriman’s diary should not be viewed as authoritative since this is not quite the lineup that occurs over the next two weeks in preparation for the Battle of Brunete.  Merriman says that this is his last time in his old bed, so he will be moving from Pozo Rubio to Tarazona permanently.

On the 22nd, the training was again followed up by a fiesta where the officers finally have had a chance to give their “stunt”.  Merriman says it goes over well enough but the Canadian Allan Knight was a “rage” and was awarded a prize.  Many of the significant leadership of the Brigade were in Pozo Rubio for this celebration.

Over the next few days, there will be a dinner celebration held at Ambite Mill which was General Gal’s headquarters.  Almost all of the International Brigade leadership will be required to attend.   This meeting was held between June 23-25 (exact date is not yet determined) but some of the leaders above will go and some will not.  Merriman, Dallet, Bender, Lawrence, Johnson do not attend that meeting.   The British (Aitken and Nathan) and Martin Hourihan and Steve Nelson (who were closer to the resting points of the Lincolns at Albares, the British at Mondejar, and the Washington’s at Morata) do attend.  More on this event in a coming post.