Robert Merriman has intense days in 1937 where he writes a lot and even (like today) needs a continuation page.  This particular diary entry is illuminating for his frankness about the dynamic of the leadership of the XVth Brigade and the Vth Army Corps to which it belonged.  We might pause to review this, this is the organization of the IB’s (also in Thomas¹) about May of 1937:

The 60th Battalion – Mackenzie-Papineau Battalion – was not formed until after 29 June.  This was “The Third Battalion” in Merriman’s diary initially led by Robert Merriman, later by E Cecil-Smith)

14th Battalion – The Dimitrov Battalion (largely Slavic) lead by Chapaiev who served as the Second Regiments leader as well.

24th (“Voluntario 24″ , later absorbed into the 59th Spanish Battalion”) – This battalion which contained many anarchist units was decimated over the summer of 1937.

With this review, we see that Merriman rose on the 31st for work and the new uniform goes into the closet and he switches to his work clothes.  After some infantry and machine gun lectures, Merriman meets with the men and provides criticism.   Merriman spells “Snyder” but this is Murray Schneider.  Schneider is dressed down for participating too much and “Avgherinos”  for participating too little.  Jim Carmody caught the fact this this must be Hercules Avgherinos and not Costas Avgherinos who was dead by this point.  From Carmody:

Hercules later became a member of SIM, and was involved in tracking down Anarchists and others who were helping deserters from the IB’s onto ships and out of Spain. He was later based in Barcelona and was part of the IB Delegation there. He was repatriated from Spain in October,1938.²

Irving Morrison, Steve Daduk and Ed Flaherty are released to Albacete where they will be sent back to the US.  Daduk will return on July 2 and Flaherty on July 31 to the US.  Morrison however will not return until 1938.  On June 1, Merriman will include Sterling Rochester in this group and it is possible he mixed up the names.

General Gal (Janusz Galicz) arrives at lunchtime with David Zaret (real name Daniel Abraham Zaretsky  aka Daniel Zorat aka David A. Jarrett) who was Copic’s Chief of Staff.  Gal’s interest was meeting with his countrymen from Hungary but Merriman wanted to show off his new technology (a mirror to be used when firing a machine gun and keeping your head down).  Gal took a turn at the gun.  Meanwhile Merriman got Zaret to reveal details of a high level party meeting between Gal and the leading American CP cadres Harry Haywood , Bill Lawrence and Bob Minor.   This enclave which lasted most of a day clearly got into the details of who would go where in the new reorganized Brigade.   Recall that Merriman blamed Copic for the disaster of the 27th of February and he expected Copic to be removed.   Zaret lets Merriman know that Allan Johnson had been cleared of the accused “desertion to the front” of April 5 and that more responsibility will be given to Johnson and Copic’s removal is under consideration.  Through the lens of time, Zaret must have been in a tough spot with loyalty to the Americans and working for Copic and hearing that Copic is only being warned to “shape up”.  Copic’s political skills were extensive and his support within the Comintern was not negligible.  Merriman’s activitism to have Copic removed will fail here and fail frequently over the next year.

Gal’s thinking is revealed to Merriman and he will be adjutant for Marcovics in Tarazona for the (still to be named) Washington Battalion.  Given a choice between Marcovics and Merriman he is told they are both from “Mexico”, i.e. the Soviet Union.  This would indicate that Merriman is being given credit for his time in Russia, although according to Marion Merriman Wachtel,  he was studying agricultural economics.  Whether this indicates that he was studying more than agriculture or whether Merriman has claimed that his time in Russia gave him status with the CP is not clear.  Zaret says that the conclusion was that Merriman would go back to a line position either as head of the Lincolns or as head of the new Battalion (the Washington).   Since Oliver Law was in charge of the Lincoln and Marcovics believed that the Washington was his, Merriman will have to bump one of them aside.  He says Gal decides he is to go to Tarazona (i.e. go to the Washington Battalion, with Markovics).

Marcovics must have had his informants out because he races over to Pozorubio on a motorcycle and found out what is going on.   Dave Mates who was the Commissar for the new Washington Battalion was viewed as  “weak” so Merriman suggests to Marcovics that he become Marcovics adjutant in the Washington Battalion.  Marcovics is so thrilled with this idea that he asks to see the orders first.  He told Merriman a flat No!   Merriman must have been totally taken aback.  They later go to see Gal to get the word directly and Gal tells Marcovics that as Adjutant, Merriman would “sit on your left”.   Whether this is to be taken literally or not, it does bring to mind Mark 10:37 where James and John asked Jesus:

They said unto him, Grant unto us that we may sit, one on thy right hand, and the other on thy left hand, in thy glory.

If it was a biblical reference, Gal must have had quite the sense of humor.

In the next sentence, Merriman is encouraged to practice his Russian again and he says he will speak to “gegymka”, written is longhand but in print in Russian дедушка , “dedushka” (thanks to Barry McLoughlin and Alex Zaks for the transcription).  A dedushka is Russian for “Grandfather”.   It sounds as if he will be going to a  senior Russian advisor to speak about “weapons, etc.”  but given the prior discussion and train of thought, one must question whether Merriman is now playing power politics to get that Washington Battalion assignment and to get out of Pozorubio.  He says Gal will visit “them” (presumably the Russians) after dinner on the 1st of June.

The shuffling by Gal encouraged Merriman and Marcovics to go together to see Vidal about the new assignments.  But as we see in the following paragraphs, Merriman did not waste time and went into Albacete on the ruse of intervening with Bill Lawrence who had come back from Jarama.  Minor was already gone so Merriman would be trying to pull strings within the CPUSA and Lawrence.   Lawrence confirms what Zaret had already told Merriman. Lawrence confirms that Johnson’s actions of April 5 are repaired and that Johnson is off the hook.  He may end up as Chief of Staff under Copic and that Copic is depressed by the reorganization talk.   Merriman must have asked if Gal knew what happened on February 27th and finds out that Gal is blind about the controversy of February 27 (should read “does not know, not does get know”).  Lawrence tells Merriman that he has Gal’s support and Gal thinks Merriman “knows how to work like a Bolshevik”.   He says “Johnson not”.  Whether this is a criticism of Johnson being soft, Johnson not being a Communist or just not following orders is not known.  Recall that Johnson reorganized the Lincolns at Jarama without Copic’s approval and some appointments were overturned.

Lawrence revealed that in the 7-hour discussion the possibility of Merriman leading the Washingtons and Marcovics being his adjutant was tossed around.  But the Americans decided on a position which is revealed here.  Merriman can only go to the Lincolns with Haywood, Johnson and Hourihan’s approval.  This shows that if Oliver Law is to be removed those three American CP members would have to take the hit back home for how that would look.  That could hardly happen easily.   The Americans agreed that it would be bad to have Merriman and Marcovics in the same battalion and the bad trust shown between the two men indicate that this is a wise position.   In the formation of the 3rd Battalion, they could bring Rollin Dart back from Cordoba and make him Marcovics adjutant and Merriman could take the 3rd Battalion (the Mackenzie-Papineau Battalion).

Merriman goes to Albacete to argue for this line and has time with Vidal.  He finds that this path has already been decided by the Brigade.  Merriman will help Marcovics train the Washingtons until they leave and then he will take over Marcovics’ role with the third battalion.  Merriman will not let the 27th drop and he discusses Copic again with Vidal, who throws Merriman a bone by saying Copic might be moved.

Merriman needed more room to finish his report and entered it on the October 15 and 16th diary page. 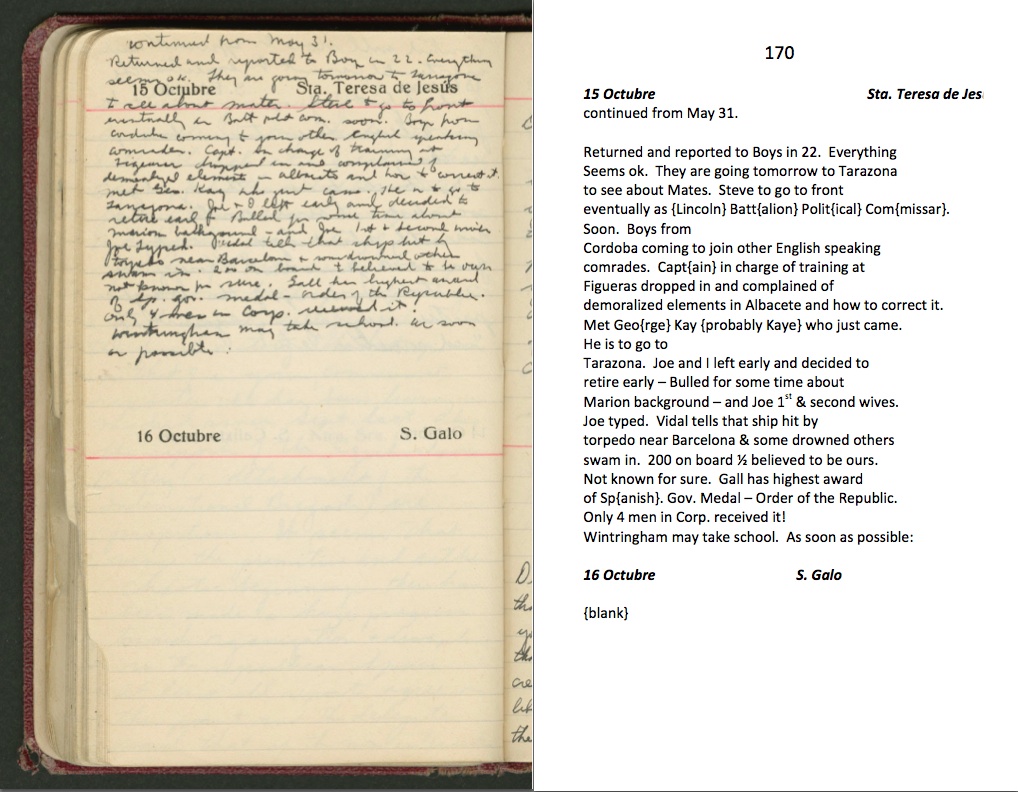 Merriman returns to the hotel and meets with comrades in Room 22 (this would be Minor and Lawrence’s room).   He says that they will go to Tarazona and check on Dave Mates to see whether he is ok.  Steve Nelson is tagged to be the Lincoln Commissar at this point and will go to Jarama soon.

Merriman reveals that the men who were assigned to the 86th Brigade (20th Battalion) at Cordoba will be coming back to join the XVth.   This will bring about 100 or so more English speaking comrades into Tarazona, many of whom will be battled hardened and available for leadership.  Gates and Dart are notable inclusions.

Merriman says that the Captain in charge of training at Figueras came to Albacete to report that some men in Albacete are “demoralized elements”.    It would be interesting to have overheard that discussion.  George Kaye is now in Albacete.  Merriman “bulled” with Joe Dallet in the evening and shared stories about Marion (little did he know the pain she was suffering in Murcia at the time, see the posting of 29-30 Mayo).  Joe Dallet talked about his first (Barbara R. Eisenberg)³ and second (Kitty Puening)  wives.

Merriman gets news that the Ciudad de Barcelona has been torpedoed and that perhaps half of the men on board were Americans for the International Brigades.  Sebastiaan Faber of ALBA wrote an article on the sinking of this ship for the 75th Anniversary in 2012, there is a new website dedicated to the memory of the sinking of the ship,  and some letters and poems from veterans describing their experience are online at the University of Illinois.

After acknowledging that General Gal won a medal from the Spanish Republic, Merriman finishes with the note that Tom Wintringham will soon come to lead the school and we can hear Merriman’s urgency to get out of Pozorubio with “As soon as possible”.