As training progressed in Villaneuva, the leadership personalities in the Lincoln Battalion chafed at each other.  The accusations of Steve Daduk against Merriman may have been resolved in Merriman’s mind, but the January 31 entry in the diary shows that the issue was not over.  Merriman says that Steve Daduk accompanied James Harris to Madrigueras where Daduk was suspended.   John Scott (Invar Marlow) and Eugene Morse are again mentioned in today’s diary.  The day was otherwise routine and Russian movies were shown in the evening.  The reader can watch the movies “Chapayev” and “Kronstadt” on YouTube.  Together they run about six hours so it must have been quite the movie night in Villaneuva de la Jara.

Merriman also mentions that the son (by marriage) of Professor J. B. S. Haldane visited Villaneuva.  J. B. S. Haldane was a chemist and advised on chemical warfare and protection from the poison gas used in World War I.  Merriman relates that they began training against gas warfare. 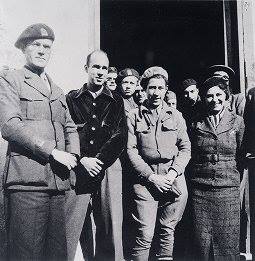 Merriman notes that Daduk did well in training on January 30 but then the “scandal broke” and the hearing on the previous diary pages was held.  Merriman freely uses the term “scandal” throughout the diary and it may not have the same connotation in the 1930’s that it has today.  One of the dictionary definitions of “scandalous” is “defamatory; libelous.”   That would clearly fit the situation here.

Rickard Jorgensen believes that the scandal goes back to the stories of Daduk’s history in Spain.  In Sugarman’s article¹ about Jews who fought in Spain he says about Daduk:

“Capt. Samuel Leon (?) Stephen Daduek/Daduk – 1st American to fly for Loyalists, red/blonde haired pilot, stocky, former sign writer and electrician , wore a red bandana and blue overalls when flying – b 10.2.10 Brooklyn – 2367 64th St Brooklyn – d 10.10.86 – wia in crash breaking his thigh – flew in battles over Madrid, in Potisis, Fokkers and Breguets (in which he shot down one Heinkel 111). Before and after flying he had fought in the infantry as a company commander of the Lincolns and with the Thaelman’s – wia several times. Fought in WW2 Medical Corps.“

As noted before, Landis believed the claims that Daduk had been a pilot, but his resume apparently did not bear the scrutiny given him in the hearing of January 30.  Some texts have said that Daduk was removed as Company commander of the 2nd Company just before Jarama “when he cracked up” or “lost his nerves”.   Eugene Morse, above, was the 2nd Company commander when in two weeks they will go to the Front. From Merriman, it is apparent that this swapping of Morse for Daduk happened quite early in Training.

The notes page at the end of January gave Merriman the chance to catch up with other business and he notes that John Givney was removed from the battalion on January 30.  No reason can be found in Merriman’s diary.  John Givney deserted in May 1937 and would be a problem for Merriman throughout the spring months.  Givney will be injured in the Battle of Brunete on July 9, 1937.

¹ Martin Sugarman, Against Fascism – Jews who served in The International Brigade in the Spanish Civil War, ibid.