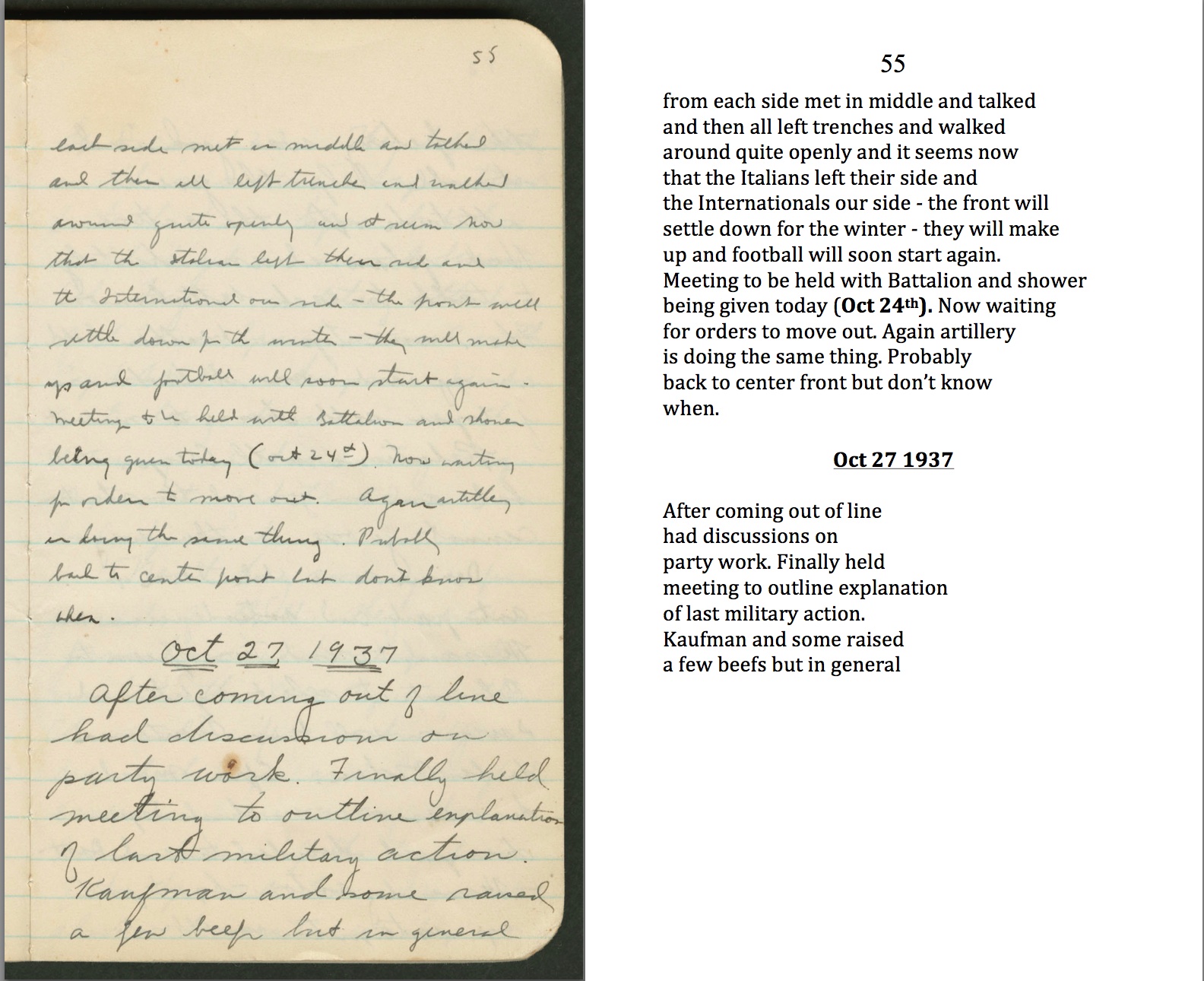 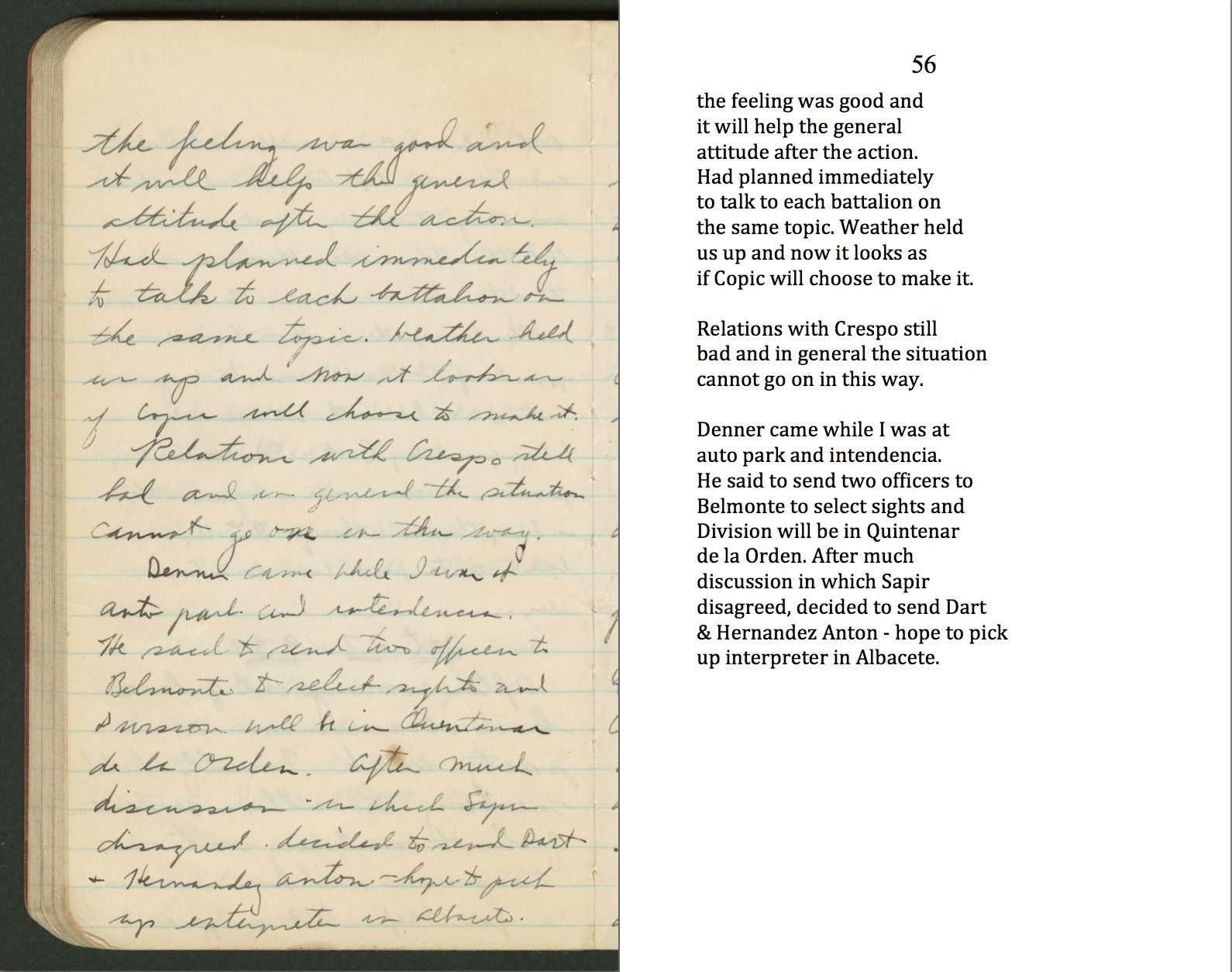 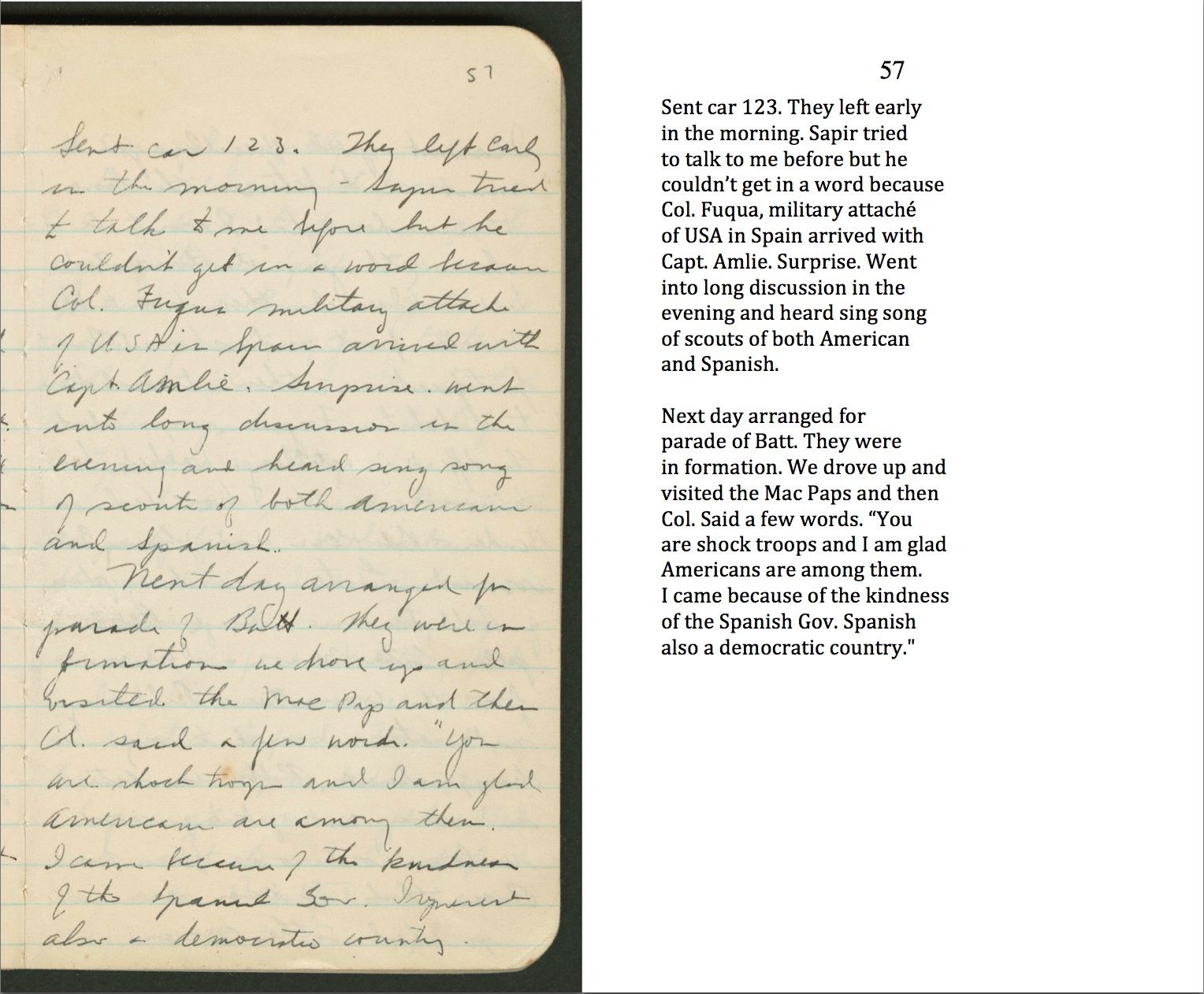 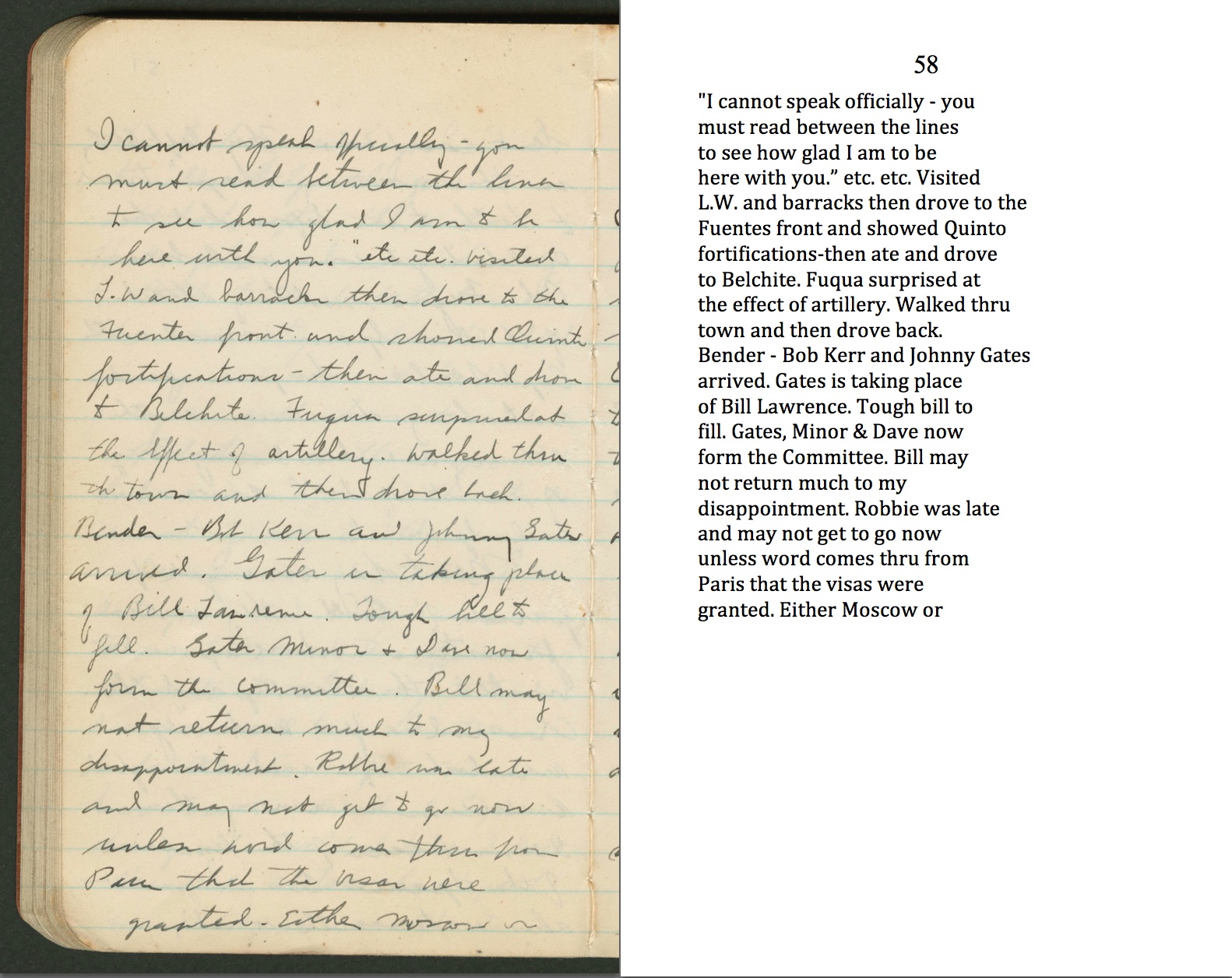 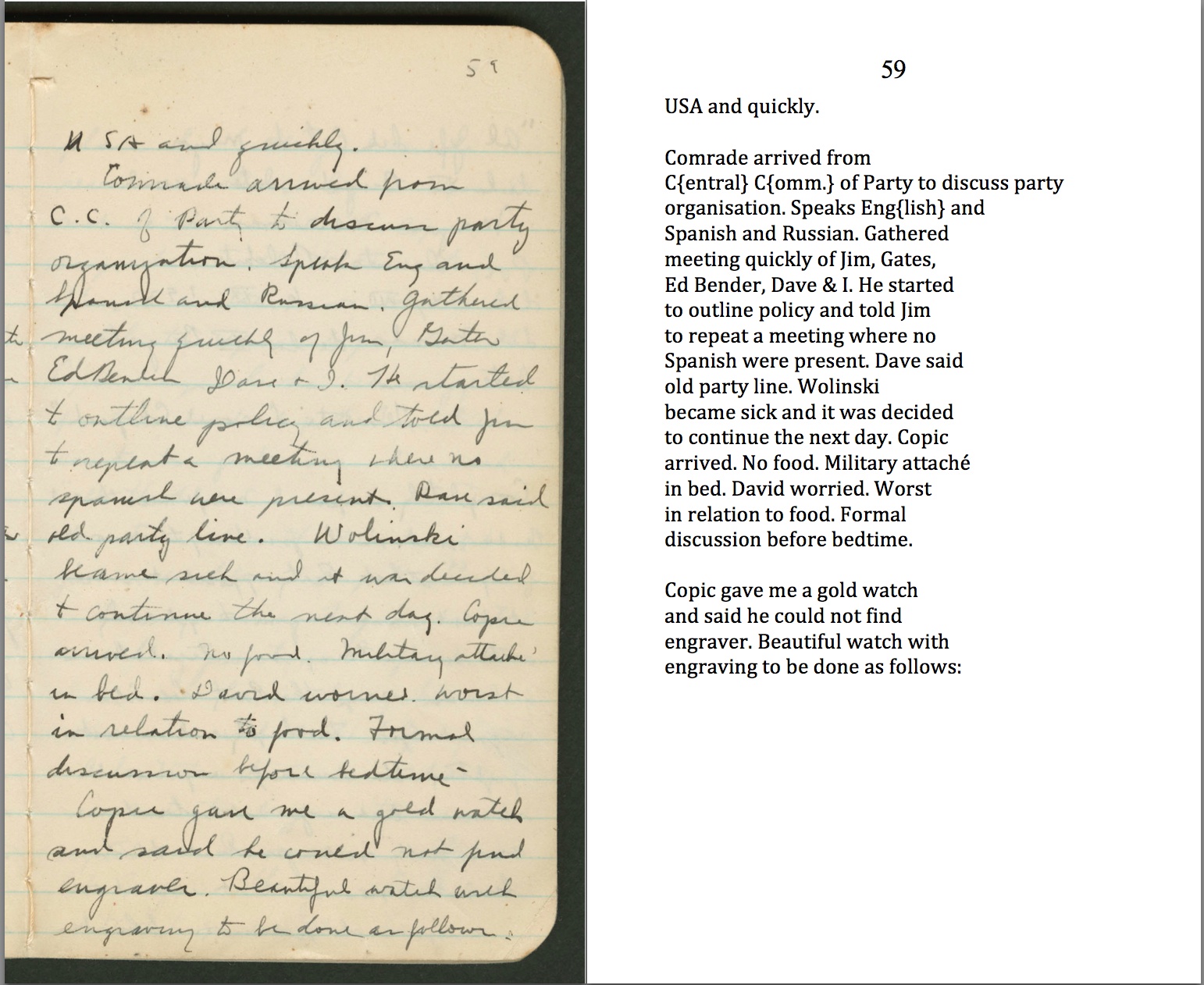 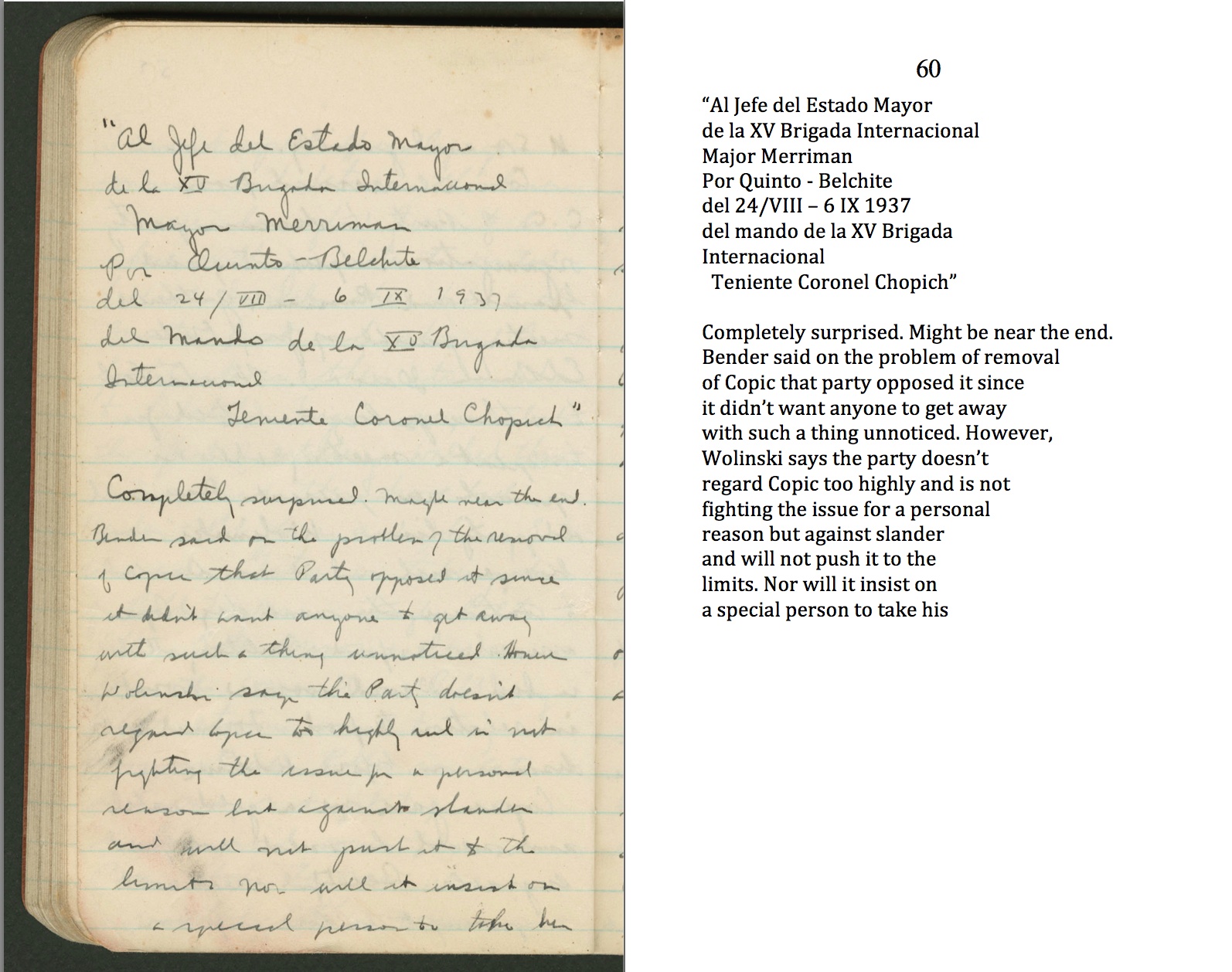 On the 27th of October the XVth Brigade is withdrawn from the front lines and taken to Quinto.  Meetings are held and Rubin Kaufman leads some of the griping at the first meeting.   Merriman, however, is happy how the meeting went and plans meetings with each Battalion in turn.   He says that Copic remains at Quinto and takes part in the meetings.   Merriman still is fighting with Major Crespo.

Denner again came from Cuerpo and asked for two men to go ahead to the new Brigade positions near Quintanar de la Orden, where the Estado Mayor would go and the Battalions will be based in Belmonte which is a few kilometers east of Quintanar.   The Brigade never moved to these positions, but rather returned to positions near Ambite where they were based in June.

Merriman was visiting the Intendencia and Autopark so he was unable to comply with the order so Sapir decided to send Rollin Dart and Anton Hernandez to go on ahead to Quintanar.   Before Sapir could tell Merriman what had happened, Hans Amlie and Colonel Fuqua return and want to see the sites.

Merriman says that the next day (probably October 26), they went up to Fuentes to see the Mac-Pap positions.  There is a photo of Dave Doran and Amlie with Fuqua in a Fuentes trench (right).  Fuqua addressed the Mac-Paps in an impromptu parade (left).  Fuqua and the staff then visited Belchite where they inspected the ruins.

When Merriman gets back to Quinto, Edward Bender, Canadian Commissar Bob Kerr and John Gates arrived.   John Gates will become the American responsible in Albacete, replacing Bill Lawrence who would return to the US.  Merriman says he will miss Lawrence.   John Gates, Dave Doran and Bob Minor represent the U.S. Communist Party Committee in Spain.   John Robinson misses his opportunity to go to Moscow as his visa is not available.  Robinson will stay in Spain.

A comrade named “Wolinski” arrives who represents the Central Committee of the Communist Party.  He asks the Staff in Quinto for a meeting where no Spanish would be present and where the political organization of the Brigade would be discussed.   Dave Doran says that what is discussed is the “old Party line” where the involvement of Spanish in all activities would not be encouraged.  This is later discussed as “The Spanish Problem”.   Clearly, the involvement of Spanish leaders in the Brigade, like Crespo, who were not Party men was a problem for the Internationals.  Overnight, Fuqua was sick and confined to bed and Wolinski also got sick.  Merriman and Doran are worried about how this will be reported back to their respective leaders.

In a surprise move, Vladimir Copic gives Merriman a gold watch and tells him how he would have engraved it if he could have found an engraver.   It was in recognition of Merriman’s service at Quinto and Belchite.  Perhaps it also was a thank you for Merriman’s intervention in Valencia where they were talking seriously about pulling Copic out of the XVth Brigade.    Marion Merriman Wachtel is less impressed with the watch:

In what I thought was a mockery, Copic had presented Bob with a gold watch as commendation for Bob’s leadership at Quinto and Belchite.  But it was a cheap watch.  Copic said he planned to have it engraved but couldn’t find an engraver.  I didn’t see how Bob could stand to work with a superior who cared so little about his men  Bob put up with COpic because he had to, but argued with all of his powers when he disagreed with Copic.  As a commander in the European tradition, he didn’t relish subordinates presenting contrary views.  He frequently called the Americans “crybabies” because they challenged him so much.¹

In a later page of the diary, there is a short paragraph where Merriman began to dictate his letter in support of Copic.  The letter was not completed and he must have found a secretary to take the letter down.   Merriman says it may be near the end for Copic, but also relates that Bender and Wolinski say that they are not in favor of removal of Copic because it reflects badly on the Brigades.  Copic has few friends in leadership but his personal welfare is less important than how it would look to remove the Commander of the Brigade for failure.   Copic, personally, has asked for a couple of more months in the Brigade and then perhaps to move up to command Albacete base.  At the time Comrade Bielov was in command of the base and wanted to leave.

On the evening of the 27th, Merriman meets again with Col. Fuqua but refuses to answer his questions.  Fuqua, while ostensibly fact-finding for Claude Bowers at the US Embassy, was still not trusted and Merriman could not be sure where the information would go. Others noted that Fuqua was a US Army colleague of Major Allan Johnson, now the Tarazona training base commander.   Amlie also is suspected of having been an acquaintance of Fuqua in the US Army.  André Marty did not agree with the government’s approval of Fuqua’s visit and held all involved (Merriman, Amlie and Johnson) in the highest suspicion.²,³  Merriman did agree to show Fuqua the Russian anti-tank guns on the 28th.