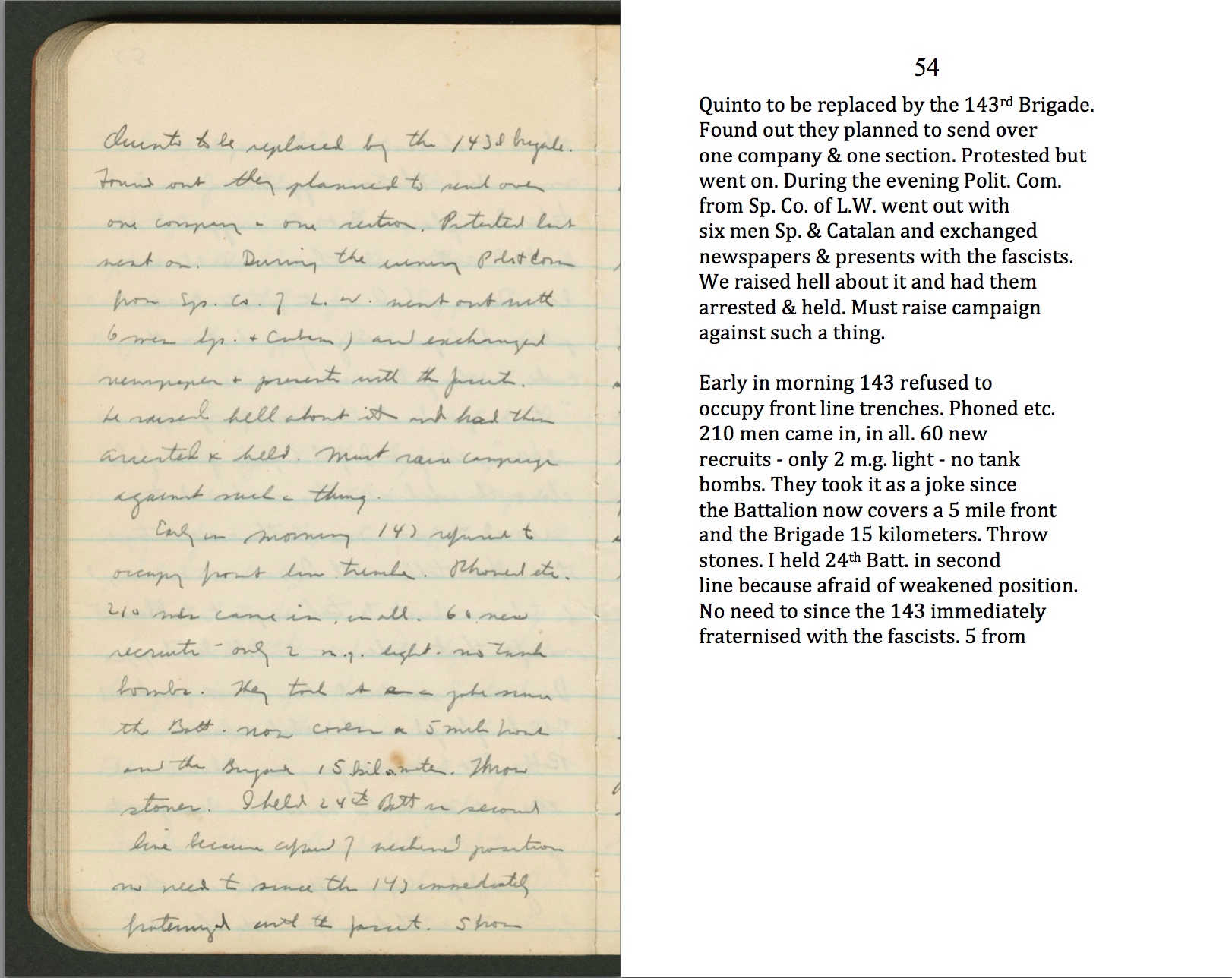 The end of Merriman’s October 22 diary pages starts “Just before Copic left – order came thru for us to withdraw from the line into” and finishes “Quinto to be replaced by the 143rd Brigade”.   The 143rd Brigade was led by Captain Nicanor Felipe Martinez and is described on the “Guide to the Mixed Brigades”, a wonderful website for determining the leadership of the Brigades.  The Aragon Front was settling down and both sides seemed happy to leave only minimal troops in the cold trenches.  The 143rd was offering up one company and one section, probably 130 men, to man a 10 kilometer wide front.  Merriman thinks this is ridiculous and protests.  He leaves the 24th Battalion (what is left of it after reinforcements were brought in) into a second line position, in case the 143rd is overrun.  In an iconic story of the front, the Spanish Battalion’s commissar, with some men from the 24th and 143rd, went over the trenches and met with the Spanish fascist troops and exchanged gifts.  At this time, it is believed that Captain Abad Garcia was the commissar of the 24th Battalion and he would have been arrested for this contact and fraternization with the enemy.

Merriman finally got 210 troops of the 143rd to come into the trenches after they first refused to join.   Merriman says that they only have two machine guns and some light weapons to guard the five mile wide front that the Mac-Paps and Lincolns held.  Merriman reveals that the contact with the enemy showed that the Italians were now gone from the front and since the Internationals were being pulled out, the front had only Spanish troops who worked out a local cease fire and truce where the whole battalion went over and met with the enemy.  One can imagine how frustrating this was for the International Brigades who were just decimated at Fuentes de Ebro.   Art Landis points out how ironic it was that on October 21, the Italians would lead an attack and take Gijon.¹   It is not likely that this would be the same Italian divisions.

Merriman says that the short stay in Quinto is coming to an end and they are awaiting orders to pull out by train, back to the Center Front.   During this period, from the Effectives List of Company 3 up to November 5, one can determine that many of the Lincolns were given leave to Madrid.