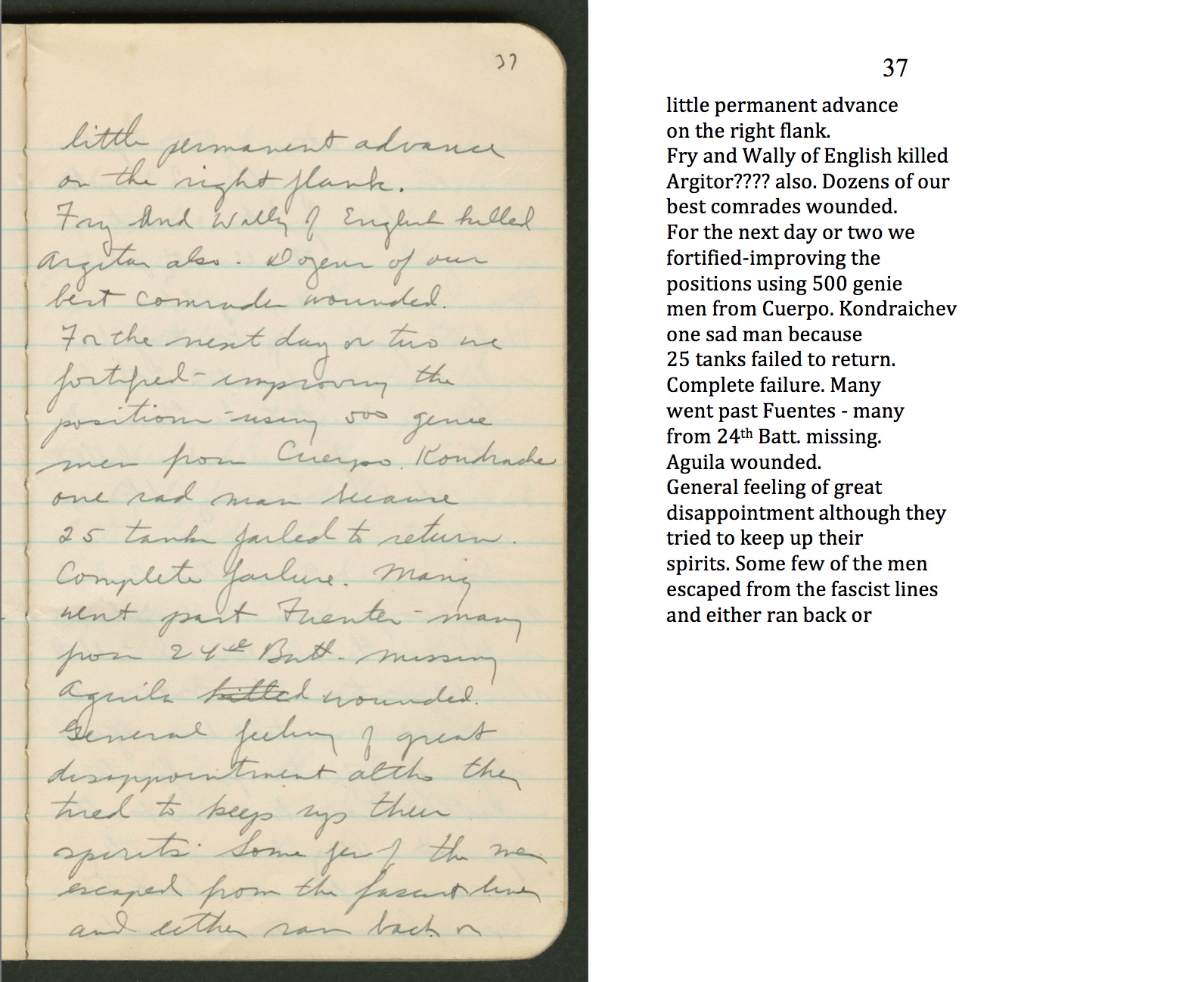 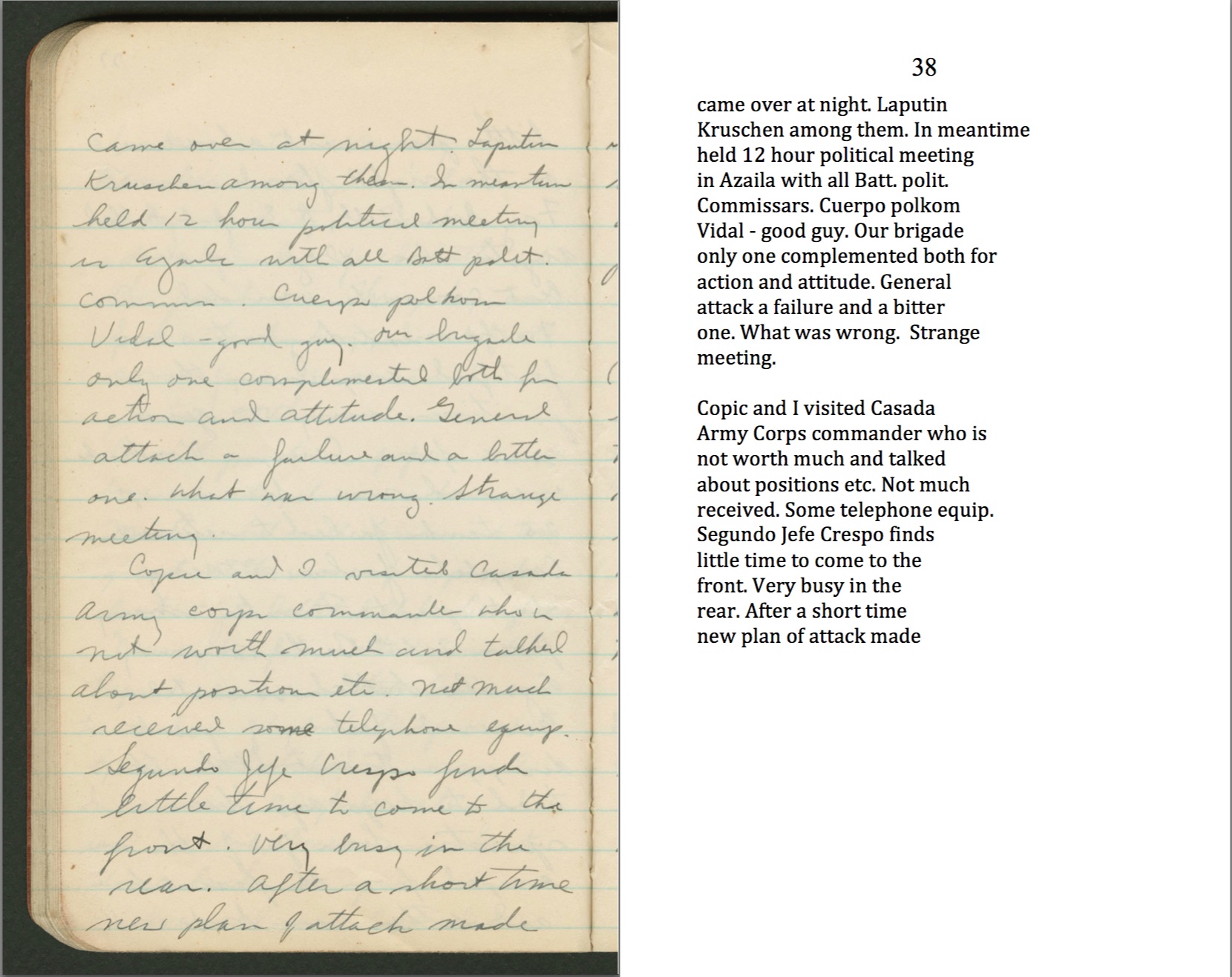 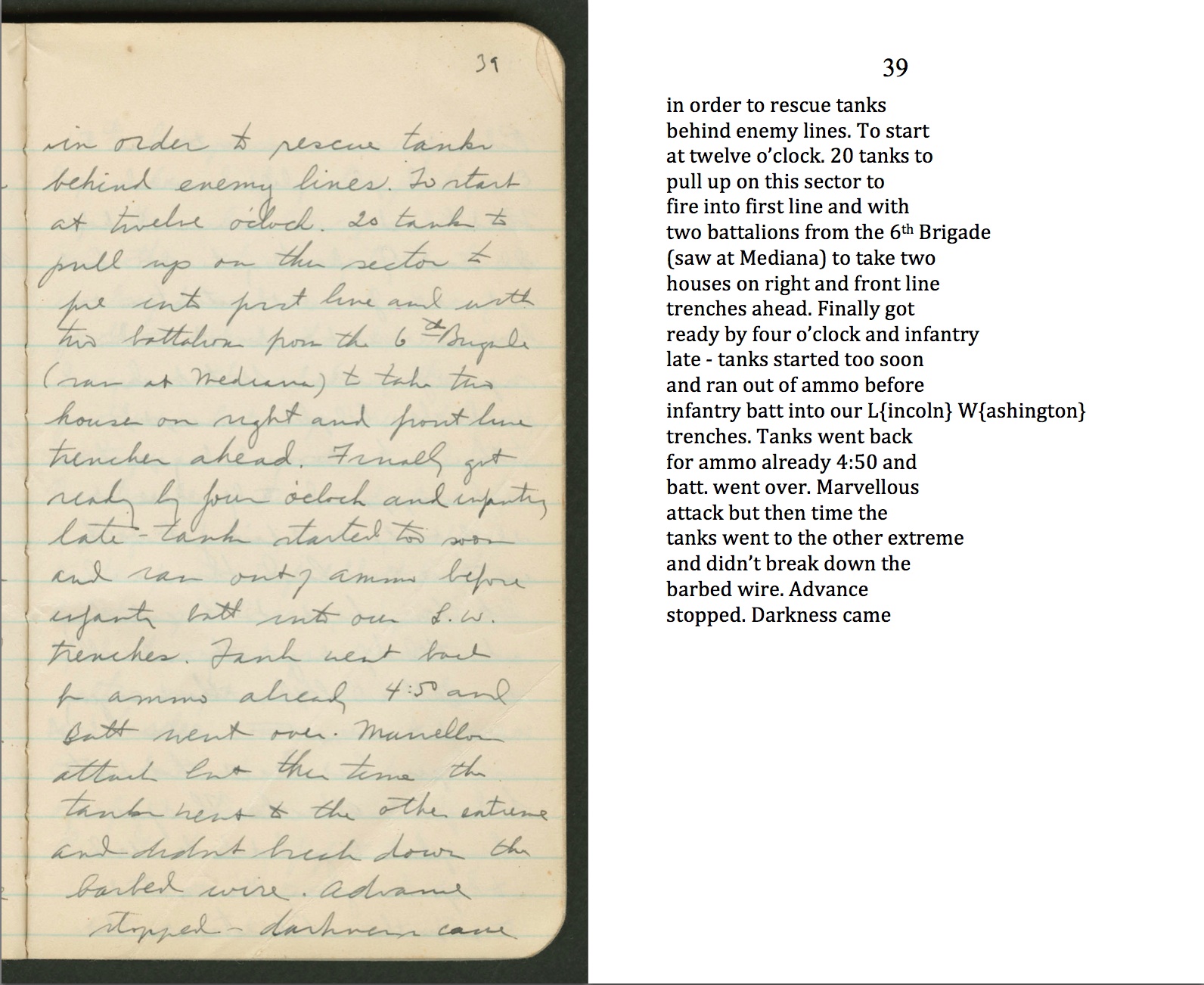 Merriman continues his description of the evening of the first day of Fuentes de Ebro and the second day.  Merriman said on the previous page that the Americans and British returned in the dark to the staging position which was a couple of kilometers south of Fuentes de Ebro.  The Fascist troops were heard that evening celebrating what they believed was a victory over the Republican tanks and given the number killed in the first assault, one can accept their assessment of the day.   The fact that the Americans and British left the lines indicates that they believed the assault was done.   Merriman sent them back to their positions.   Merriman continues here by saying that the Mac-Paps were successful in advancing on the left flank.  On the right flank, however, British Captain Harold Fry was killed.  Fry had been injured and captured in an assault on the British machine gun  company in February .   He returned to the Brigade and led the British again at Fuentes.

Merriman says that “Wally” was also killed.  This is believed to be Eric Whalley of Edinburgh who was killed on October 13 at Fuentes de Ebro.  The name transcribed as “Argitor” is Louis Argites.

Merriman says that 500 men of the engineering (“genie”) battalion were thrown into the trenches at the front to improve the protection of the troops in at the front.   This would have carried them up to the 15th with minimal action.   Merriman says that Kondratyev (Kondraichev here), the armored Battalion commander, was distraught about losing 25 tanks.  Given that 25 new BT5 Russian tanks were used in this action for the first time, this loss was devastating for the tank corps.  Merriman says that some of the tanks bypassed Fuentes but still did not return.  The 24th Battalion which had ridden in on the tanks was also wiped out with its commander Aguila wounded.

Merriman mentions two Russian names, “Laputin” and “Kruschen”, who were likely to be tank commanders.   The Brigade political commissars held a 12 hour meeting to discuss what to tell the men.  It was led by the chief political commissar of the 5th Army Corps, a Spaniard named Vidal, not to be confused with Lucien Vidal (Vital Gayman), who had been commander of the Albacete Base in the Spring of 1937.

Merriman says that he and Copic went to visit Casada Army Corps.  He probably meant Segismundo Casado who was the head of one of the five army corps and was a chief strategist in the Aragon Battles.   Merriman does not get much out of the meeting, even in the way of supplies.  He again comments negatively about Major Crespo who was the 2nd Chief of Staff of the Brigade and Merriman says that Crespo just stays in the rear.

Merriman says that another plan of attack is made designed to go rescue the stranded tanks.  This could be read that it would be on October 15 at noon.   The plan was to take 25 of the remaining tanks to fire into the front lines of the Fascists and the 6th Brigade (says “saw at Mediana” but should be ran at Mediana) would assault the lines.   Again, everything was delayed and the tanks rank out of ammunition before the troops were ready to go over.  The tanks had to return to reload and the assault started at 4:50 in the afternoon.  The tanks never got back in position to take down the wire and the assault stopped.  Another poorly coordinated action and light failed before anything could be achieved.

Milt Wolff continued in his recall of the Fuentes de Ebro action and told Art Landis a story that Landis had never heard:

And I remember one other attack at Fuentes de Ebro that Danny Groden was involved in.    Another attack, an infantry attack and this is the only attack that the Lincoln-Washingtons participated in.  We had found, right off the Machine-Gun Company right flank, a gully going down into that valley where the fascists were.  And they went down into this gully, they went all the way down, maybe 4 or 500 yards without being seen.   And, ah, at some prearranged signal we were supposed to open up with our guns, the artillery and planes were supposed to come over and all that stuff.  Fuentes de Ebro.  And nothing happened.  These guys went over out of the gully and they got caught.  And as a matter of fact, this is where Danny got hit.  Yeah, you might want to talk to Danny about that.  And I think that is where Harold Smith got hit, too.  Do you remember that?”¹

{Landis and Wolff then get off track arguing about whether Harold Smith was hit or not.  Harold Smith became an active VALB  member after the war and was an editor of the Volunteer.  But there were three Harold Smiths in Spain and it is likely that Wolff and Landis were arguing about different men.}

This assault did not recover the tanks and overnight the Estado Mayor of the Brigade was overrun with irate Russian tankers who expected to get their tanks back.   Merriman lets the scouts go forward to have the 25 tanks help take down the wire and he just goes to bed and lets them shout.   The Russians retreat from the Estado Mayor as well as from the field at Fuentes de Ebro.  The ground battle is nearly over at Fuentes.