On the early morning of the 23rd of August, Merriman learns what the objective is and within hours they are supposed to be in motion.  “Tremendous confusion” says Merriman.  A World War II phrase would be SNAFU, “situation normal all fouled up”.  Merriman is told that they would attack the hill overlooking town, Purburell Hill, where supposedly the Republicans had trenches.  Although the Brigades did not know it at the time, Purburell Hill was held by a nearly 800 well fortified Fascist troops and there were a series of significant block houses on the hill from which machine gun fire could sweep up any attackers.    One Lincoln said that you could roll a grenade down that hill to attack any troops coming up and the grenade would roll forever.   The plan changed rapidly with the plan to sweep around the town and take the cemetery which was on the far side of Quinto.  As the attack is being organized, Merriman finds that ten machine guns are missing.  Rinaldo appears to be the person who was to provide arms and he is doing a poor job so Copic wants him removed.

As sunlight approached on the 24th of August, General Walter briefed the troops and said that this would be a hard fight.  Merriman leaves to go up on a hill which becomes the observer post for the attack on Quinto.  Merriman sends up 40 of the British Battalion but realizes that he needs to first get the Dimitrov Battalion forward as they were to lead off the attack at 7 AM.   The 24th Spanish battalion was split up to cover the Division staff and the second company to start the attack on Purburell with the British.   The maps in Art Landis’ book are very helpful in understanding the events of the next three days.

The 24th was to be in place by 10 AM but no trucks showed up to transport them to the front.   Merriman takes off on a motorcycle to ask the 11th Division for trucks and has no luck.  Copic promises him 20 trucks would come but they don’t.  The road to Quinto became a parking lot, blocking transportation and even the Artillery which was to soften up Quinto and the heights.

Merriman says he spent the most discouraging night of his life.  Finally he requisitioned every truck that made it through the traffic jam.  He sent the trucks and materiel to Marcovics and moved them to the front.   By daybreak on the 24th,  the XVth Brigade was still in its reserve positions outside of Quinto.   Merriman arrives several hours later at 8 AM after a flat tire and missing the first assault of the Dimitrovs.    The Artillery barrage appears to go off as planned but the Dimitrovs were not in position to take advantage of the rolling barrage.  Merriman decides to reinforce the Dimitrovs.  The Block House on Purburell causes problems until Merriman remembers he has the precision antitank guns and sends them to the Dimitrovs to help out.

For one time in Spain, the Republicans have air superiority and support which put the Fascists at a disadvantage.   Merriman sends Marcovics to the Dimitrovs to help Chapayev on his command.  As the day unfolds, Merriman decides to split the Americans and send half to the left flank, sweeping around both Quinto and the church and cemetery and half to shore up the middle of the Dimitrov lines.  Merriman decides to take them in himself.   He gets a bit lost working his way through the olive groves.   Canadian Maurice Constant was on the Brigade Staff and recalled¹:

There were three of us.  There was Merriman, some other fellow I can’t remember, and me.  Now, the fellow who was first was the lucky one because the sniper in the tower would have his first clue that people were coming.

Then it was my turn.  I knew the sniper was waiting for me.  I dashed across the road and got into the ditch.  I heard the snap of the bullet. …I thought, “Thank God! He didn’t get me.”  It was only after I got out on the road and in the Fabrica that someone said “You know, Constant, you’re bleeding.  He got you.”  I asked him where and he said “He got you in the head” because my face was covered in blood.

It turned out he got me through the lobe of the ear.

Merriman says that at 6 o’clock the artillery took up a barrage on Purburell and tanks were sent in (Victor Howard², Richard Baxell³, and Landis5 place this barrage as the morning of the 26th.   Merriman’s diary is not authoritative here since he flowed the whole battle over four days in the diary.  Merriman himself waded into the action throwing grenades and nitroglycerin bombs.)

Merriman says “Quinto is ours tonight!”.   If he wrote this on the 24th, he was overenthusiastic.  On the afternoon of the 24th at 3:00pm the Americans turned and with artillery and tank support rolling over the barbed wire that ringed the town, the Americans had taken the cemetery and surrounded the church.    There were Americans on three sides of the town and the Dimitrovs were coming into the town from the north. 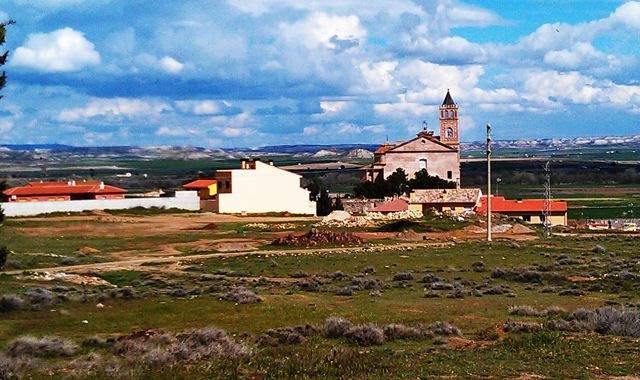 The restored Church at Quinto.   The cemetery would be behind the position from where the photograph was taken.  (Author’s photo)

Merriman says that Copic was able to secure the cemetery and placed the battalion within and under the cover of its walls.   In fact, there are many stories of the taking of Quinto and door to door fighting to clean out snipers took several days.  The Church at Quinto was particularly troubling as snipers held up within and holding hostages stopped a direct assault.  More on this on August 25.