Between the time that Harry Haywood had his face to face meeting challenging Vladimir Copic to resign and the 25th, we know from Mirko Marcovic’s remembrances that General Gal threw a party at his Ambite villa.   Eby relates the story:

In an unusual obeisance to camaraderie among his inferiors, General Gal held a banquet for his staff and the six battalion commanders and commissars at his riverside dacha.  Having been briefed on the aborted mutiny, he poured healing glasses of vodka on troubled waters, outlined his expectations for the coming offensive, and received from his retainers toasts to his health and continued success.  He explained his 15th Division would also include the XIIIth Brigade, the Dombrowski, which was on the way from a hard campaign in the South.  The camaraderie ended with an abrupt explosion of epithets in Russian and Hungarian.  The general had just discovered that Lieutenant Colonel Hans Klaus, Copic’s second in command, had — for reasons never explained — boycotted the banquet.  Gal dispatched a messenger with an order for hi to present himself at once.  Marcovicz recorded the embarrassing finale: “Throughout the banquet Klaus was put on the spot, General Gal berating him both directly and indirectly”.¹

This reference is probably more important in placing the Brigade commanders than the specific dust-up with Klaus. There are several very interesting photos in the Tamiment Library from this event.  The first which we dub “The Officer’s Photo” is a who’s-who of the leadership. 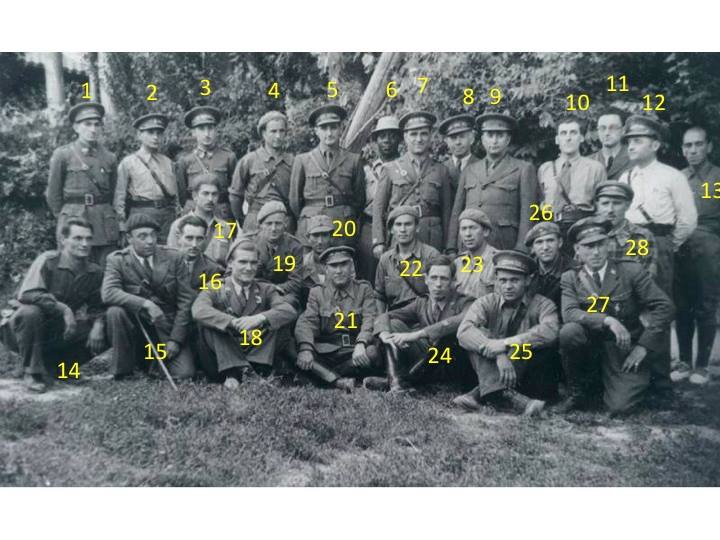 Approximately a dozen important photos were taken at the event including Copic in a tete-a-tete with Modesto, the first photos of David Doran in Spain, and a very interesting photo of a number of the people on a log over the river:

This last photograph’s caption is clearly problematic as Vidal and Gal were no longer with the Brigade in November 1937, the weather does not look like November, and the people are the same as in the “Officer’s Photo”.  George Aitken who looks to be #6 in this photo was back in England in October 1937.  He also could not have been there on that date.  Untangling, these identifications in these two photos will help with some potential misidentifications in the Tamiment Archive.   These two photos are still, after 77 years, a work in progress.

Merriman’s diary is helpful with the dates of Gal’s party.  He says on the 25th, Marty Hourihan has returned to Tarazona and others in those photos have come back as well.   Winkler and the Chief of Staff of the 13th Brigade are among them.  Merriman says on the 23rd that men at the front sense that Gal has bawled out Hans Klaus.  This would tend to put this party on the 23rd or sooner.

Merriman did not attend the party (nor did Dallet or Thompson or Allan Johnson).  He has Company 1 of the third battalion out on maneuvers and they get lost by going to a house where Merriman picks them up.  Meeting the residents, he finds a family who have been socialists for many years.

Back in Tarazona he meets with Winkler, the Chief of Staff of the 13th Dombrowski brigade and with Sam Baron, who we last met in early May.   New men keep pouring in and Merriman mentions John Quigley Robinson and Steve Nelson who will train them.   He notes that there was a swap of Robinson for Frank Rogers in the Washington Battalion.  In increasing the staffing at the front, some more Americans and Canadians will be moving to the front.  There was a description of a “Canadian company” in the Washington Battalion during the upcoming battle of Brunete in July.  Beeching says that this Canadian “section” was led first by Canadians Paddy O’Neil then by Tom Traynor then by Bill Brennan and later by Paddy O’Daire.²  Bob Kerr, the Canadian in Albacete tasked with steering Canadians to Merriman’s third battalion said that in one Lincoln Company over half of the soldiers were Canadian and 30 Canadians were in one Washington company prior to Brunete.³  These partial companies caused a lot of confusion with historians who mixed them up with the Mackenzie-Papineau Battalion which remained in Tarazona under Merriman for training.  Some Canadians will go to the front and others to the Officers’ School.

The next morning the exercise was to protect Tarazona.  Ruby Kaufman is identified by Merriman as a problem because of a tendency to dominate the exercises.   Ed Bender, Marty Hourihan and Bill Lawrence got themselves an automobile which has been under the use of General Gal.   After a lecture and a hair cut, Merriman met with Ernest Amatniek.  Amatniek is likely sent back to Tarazona to train the Battalion in transmissions.  He will serve with the Mac-Paps.  After a grueling bridge game with Dallet and Mullinger against Marion and Bob Merriman, Merriman deals with Tom Hyde again who got a “permission” which allows him to stay with the Battalion and he requests to go to Officer Training School.   Marion Merriman says in “American Commander in Spain” that they often played bridge and that Merriman could not concentrate because he had other more pressing things on his mind.   That event could have been June 26.